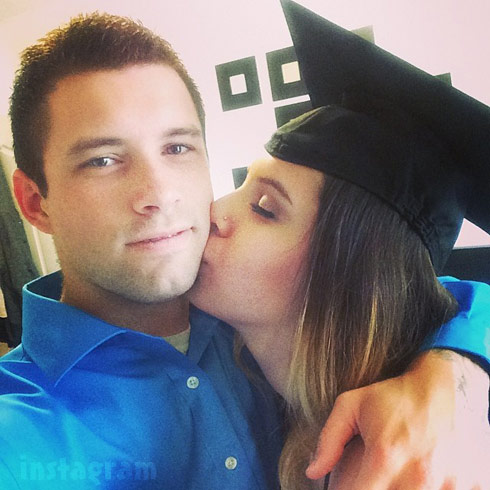 Ashley Salazar had one of the most heart-wrenching episodes of 16 & Pregnant ever as she opted to place her daughter Callie for adoption with a family member, only to regret her decision and take Callie back before realizing she was unprepared to take on all the responsibilities of motherhood and allowing Callie to return to her adopted parents permanently.

Since that time, Ashley has wrestled with depression and alcoholism (in addition to suffering a miscarriage and mourning the loss of her ex-boyfriend Jordan, who died in a car crash at the age of 23) which eventually led to her enrollment in an eight-week program in August. That program turned Ashley’s life around, and she appears to be reaping the rewards as her long-time on-again, off-again boyfriend (and Callie’s father) Justin Lane has proposed! 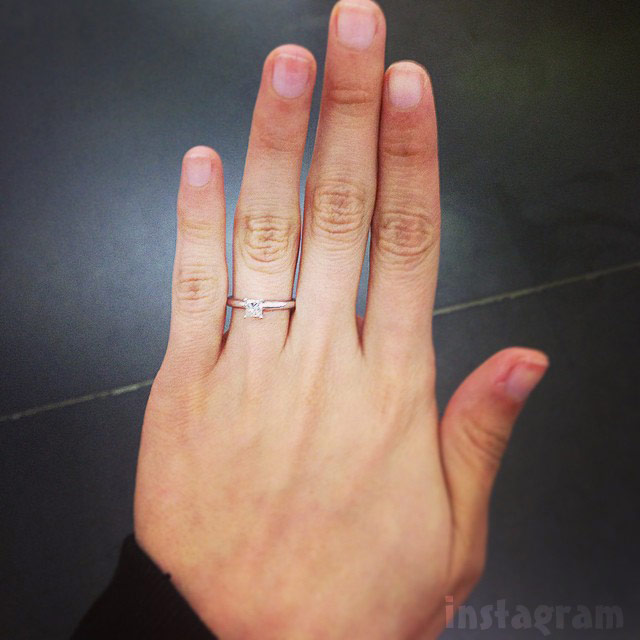 Ashley posted the photo above of her engagement ring on instagram earlier this week and wrote, “no matter what this gloomy day can’t bring me down 🙂 can’t wait to spend forever with you @justinacube #engaged #feyoncè #fiance #gettinhitched #mrslane #ididntseeitcoming” She would later add another photo of her bling with fiance Justin smiling in the background:

A huge congratulations to Ashley — not only for the engagement, but for taking the initiative to address her depression and problems with alcohol. We’ve been a fan of hers since well before her episode aired as she documented her pregnancy on her very well-written blog. Ashley has continued her blogging (and even received her college degree in journalism earlier this year) and her last two entries were brutally honest about what she has been going through.

In an entry from July titled “It Takes Courage,” Ashley admits to her drinking problem after an incident on the Fourth of July: 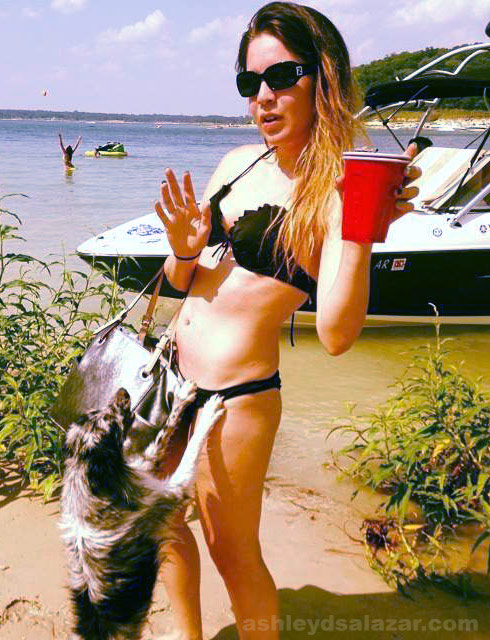 “See that photo, above? I was about 30 minutes to an hour away to being black out drunk for the rest of the night,” Ashley wrote. “It was about 3:30PM and I hardly remember that photo being taken. It’s hard to admit, but one of the last things I remember is sitting on the boat, telling the person I care about most I’m done with them. Then I went and yelled and cussed at everyone else I cared about that was around. Luckily, most forgave me the next day. Later that night, I can’t even begin to tell you what happened, because honestly I’m not even sure how it went. I’m embarrassed and shamed, but most of all, I’m sorry.”

After the incident, Ashley was sober for four days — at which time she wrote the post. It’s obvious she is desperate for a drink as she weighs out the pros and cons in prose. “I tell myself, once that I get right with myself and figure out who I am, I will be able to control my intake. I don’t think that’s the case, though.” 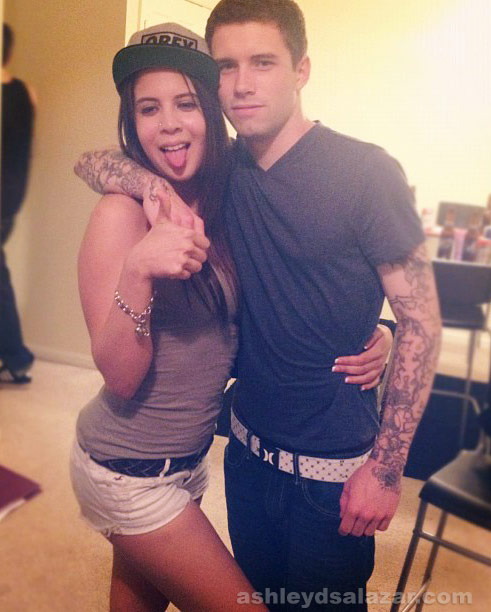 Ashley then reflects on how spoiled she had been throughout her life, starting with being the only child of a teen mother, and how she realizes she needs to grow up and take responsibility for her life and her actions. She knows that the fist step is not drinking.

People say that you can’t change who you are, but when you start letting go of the toxicity in your life, whether its a person, a substance or your bad feelings inside, that’s when a person starts to change.

And, that’s what I’m gonna do. I have to. For Callie, my loved ones, but most importantly myself. I made amends with everyone I have had issues with, but forgot about the most important people in my life. I’m strong. I can do this. Whether people believe it or not, I do not care. This is for me and I’m going to prove and show myself and hopefully everyone else that matters the amazing person that I can be and how much I can love and be there.

All was quiet from Ashley for quite a while after that blog entry, but she returned with a post titled “20 Days” on September 2 in which she revealed that she was seven weeks into an eight-week program and that it was the best decision of her life. 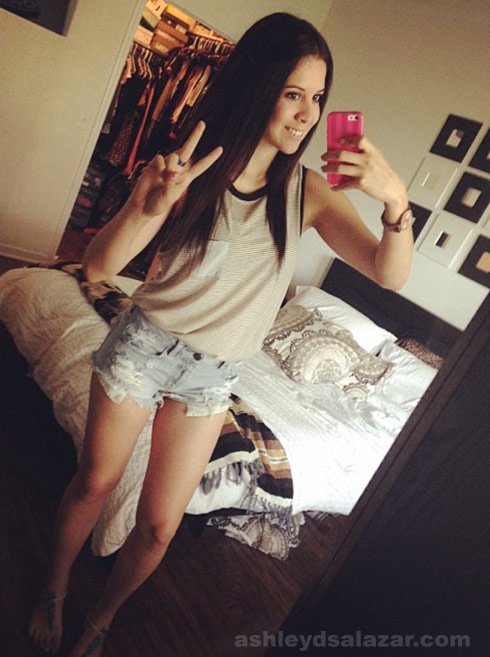 I don’t remember if it was before or after writing my last entry, I completely broke down. I was so angry and I asked God why the hell he would do this to me and put me in this place. I had everything anybody could ever want, but I felt like I had nothing. Justin was finally just done and was moving out, I had a rocky relationship with everybody in my family, I couldn’t effectively communicate with anyone, I lost all of my jobs and hadn’t been looking for anything better and I just felt alone. I couldn’t sleep. All I did was cry. I couldn’t eat. I lost about seven pounds in those few days.

Ashley talks about how Justin was there to support her, although at the time it was purely as a friend. A friend told her about the program, and after initially being reluctant (due in part to previous experiences with therapists that were far from helpful), Ashley gave them a call. “It was the best decision of my life,” she wrote. “I have met some amazing people, with amazing stories, who are going through the same thing I am and the counselors there are the best counselors I have ever worked with.”

She later reveals, “I am 20 days sober from alcohol. I know it doesn’t seem like a lot, but for me it was. I haven’t gone 20 days without alcohol since I was probably 18.”

Ashley wrapped things up on a very positive note:

I am happy with my life and confident in my own skin, finally. Me and Justin’s relationship is healthier than it’s ever been. I am getting along fantastically with Kenny and Lisa and really doing well with the adoption. I am getting along with my family better than I ever have and even find them coming to me for advice at times – that’s crazy. I miss Callie and I always will, but we (Justin, her and I) are strengthening our bond little by little. I’ve lost friends, but it’s for the better. My apartment is always cleaner. I have saved a ton of money. I also got an amazing job and my body and mind feel healthier all around.

Of course, I have rough days and times where I get discouraged. I’m not going to act like I’m so perfect and everything is oh-so amazing. I feel extremely week and oftentimes tempted, but I have better skills to deal with these hard times. Justin and my family have done a great job by sticking with me and supporting me through everything. My family doesn’t drink anymore and sure as hell doesn’t bring it around me and Justin is even working on his communication and other little things, too.

Again, I asked God why he would “allow” me to go through these tremendously difficult times and do things I have felt so ashamed for, but you know what? If I hadn’t, I wouldn’t be on my way to where I’m headed. I can’t say I know what that is yet, but for the first time, I feel confident and like I have a purpose somewhere, someway, somehow.

You can keep up with Ashley at her blog AshleyDSalazar.com and on Twitter @ashleyslzr.

REPORT Katie Yeager to be on Teen Mom 3