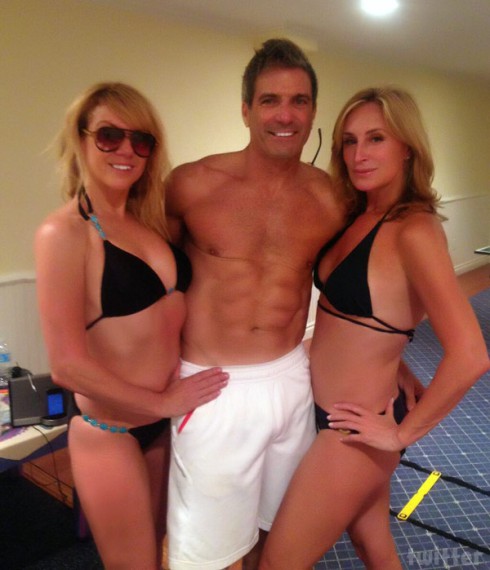 It looks like Mario Singer might need to change his name to Mario Swinger! The husband of The Real Housewives of New York City star Ramona Singer was the meat in a Frick ‘n’ Frack bikini sandwich in the above photo, tweeted by Ramona’s cast mate (and the Frack half of the sandwich bun) Sonja Morgan today along with the caption, “This past w/end w @ramonasinger @mariosinger in #Southampton”

*** Confession time. I’m a straight dude, but I have to admit my eyes keep getting distracted from staring at the sexy laydays by those man abs. Dayum dude! ***

I haven’t been keeping up with The Big Apple gals too well this off-season (aside from their contract issues), but is Sonja working out or something? She’s always looked great, but here lately she’s seemed a little extry svelte. Check out this photo of her and Social Life Magazine Editor-in-Chief Devorah Rose from this weekend: 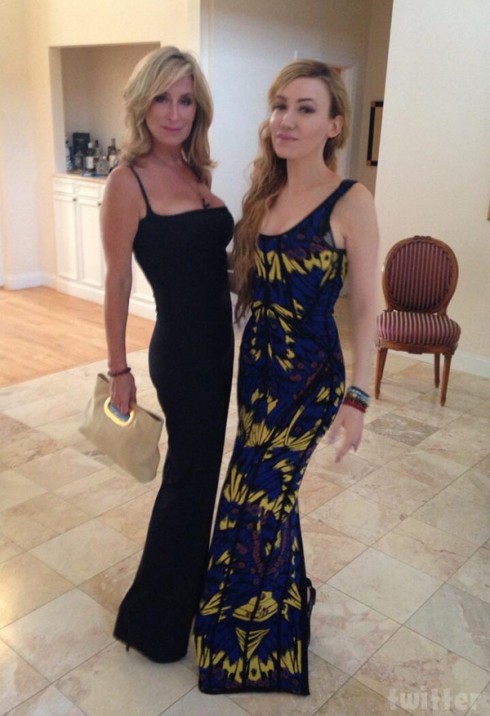 Sonja Morgan may need to change her name to Sonja Lessgan! 😉

And speaking of Sonja, Mario Singer isn’t the only RHONY guy she’s been getting close to recently. A recent Radar Online article headline read, “Trouble In The Big Apple! Sonja Morgan Flirts With Costar Aviva Drescher’s Ex-Husband — While Her Boyfriend Is Out Of The Country” in reference to Sonja and her longtime friend Harry Durbin getting a little flirty at a recent event honoring Sonja for her entrepreneurial spirit and involvement in the arts, entertainment and philanthropy.

But Sonja was quick to clear things up, pointing out that it was all innocent fun — entirely believable coming from the Queen of Flirt! “I always flirt with Harry whether I am with a boyfriend or not,” Sonja joked. “If Harry’s with a girlfriend or I’m with a boyfriend, we don’t cheat on our lovers,” she said. “Harry’s very elegant. I’m very loyal. We don’t do that. That’s not the way we operate.”

Speaking of boyfriends, where was Sonja’s new boyish beau, 23-year-old real estate developer Benjamin Benalloul when all this flirting was going on? “Ben, well, I have no idea where he was Thursday night,” Sonja told Radar. “He’s over there [in Europe] working on expanding his real estate company to the South of France and he has no signal. He probably doesn’t even know about the event because he doesn’t read his emails.”

When asked if she was just trying to smokescreen a split, Sonja said, ““No we’re not broken up, but Ben goes off on these tangents in business,” she said. “I know he is starting a new company, so I know he’s very much focused on that. We are still together. I just don’t know if he’s back or not back.”

She then added, “I don’t need to speak to him every day to know that we’re together.”

This all sounds like a recipe for some great drama on The Real Housewives of New York City Season 6!