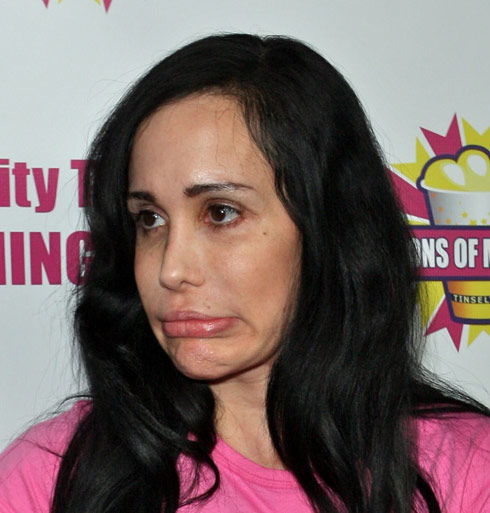 Nadya Suleman, known in pop culture circles as Octomom, is currently under investigation for child neglect by the La Habra Police Department and the Orange County Dept. of Family and Children’s Services.

The officials arrived at her home last night based on a complaint made by her hairstylist who is claiming that the mother of 14 is allowing to let said kids live in squalid conditions. Yes. Her hairstylist felt compelled to call the cops.

Here are some of the things stylist Stephanie claimed she found at the home:

A police officer and 3 reps with FCS checked out the premises for about an hour-and-a-half before leaving. Based on this initial review they didn’t feel as if the kids were in danger but stated that the investigation is ongoing.

TMZ obtained pics from the home that included showing two of the children defecating in training toilets in the backyard. Also there’s one of Nadya with her hair done while her kids were confined in a bedroom by propping a chair against the door so they couldn’t get out.

Here’s a video of Stephanie explaining why she felt it was necessary to contact the authorities.

The stylist said, “The kids are in desperate need of help, and I tried to help and she’s not open to anyone helping her.”