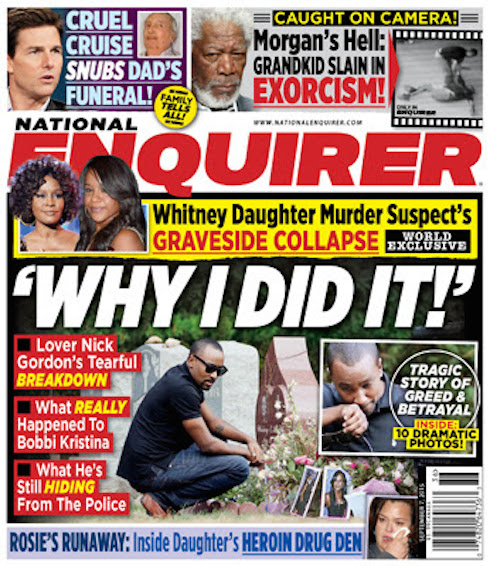 A source privy to details of the photo session told Page Six that all of the images–including shots of Nick Gordon weeping; holding two bouquets of roses; and taking photos of the joint Bobbi Kristina-Whitney Houston headstone–were staged. Allegedly, Gordon received $40,000 for the day’s work. The report states that the money went to Gordon’s legal defense fund, which is bracing for a court case in the $10 million wrongful death lawsuit the Browns and Houstons have filed against Gordon.

“It was not by accident that Nick was photographed at the site,” said the source. “Nick is broke [and] can’t afford to defend himself. There was a deal for that money to go to his defense fund.”

Though the National Enquirer was the first outlet to publish the photos, Page Six claims that Entertainment Tonight licensed a piece on Nick Gordon’s visit to Bobbi Kristina’s grave. That video ran late Wednesday.

It’s not clear which outlet paid Gordon for his time–or if both ET and NEq paid.

A spokesman for Nick Gordon dismissed the report: “This is completely fabricated,” he said. “I would also like to add, Page 6 [sic] isn’t a trusted source in news.”

The National Enqiurer responded to Gordon’s rebuttal with a statement of its own: “The National Enquirer, more than any other publication, has been unflinching in our reporting of the mysterious circumstances surrounding the death of Bobbi Kristina Brown.”

There remains no date for the commencement of the Brown-Houston civil trial against Nick Gordon.