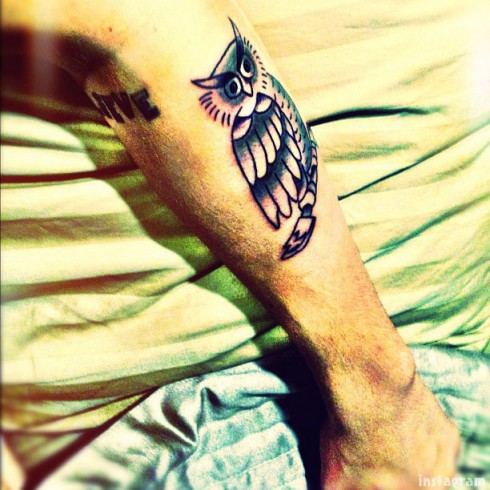 18-year-old singer and unofficial ruler of planet Earth, Justin Bieber, continues to add to his quickly growing collection of skin art, this time electing to get a rather large owl on his forearm. The Biebs shared the photo above on instagram along with the caption, “Befo the paps get me,” which obviously means he wanted to share the photo himself before the paparazzi got a picture of it.

As far as an explanation for the avian tat, Justin retweeted @letmakeitdotnl who wrote, “OWL symbolizes: Wise, Magestic and Powerful. Best tattoo ever @justinbieber”

Director, and Justin Bieber bestie, Alfredo Flores chimed in as well, tweeting “@letmakeitdotnl @justinbieber and even more important the owl is standing not on a branch but on the believe key with the wings we all wear.”

And it seems Alfredo almost got in on tattoopalooza with Justin! The Biebs tweeted a photo of the two of them together (along with a hamster) on October 27, and a day later Alfredo tweeted, “Almost got a tattoo today but I couldn’t do it.”

The owl joins a list of Justin Bieber tattoos that includes a Yeshua (Jesus) tattoo on his side (his dad got a matching one at the same time), and a Jonathan Livingston Seagull tattoo on his waist.