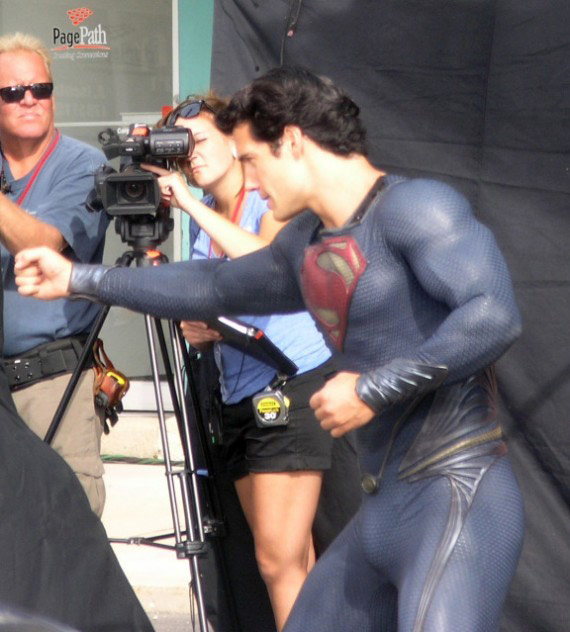 Zack Snyder’s Superman: Man of Steel is currently filming and the lead actor Henry Cavill was caught by some fans in candid photos doing his thing and something very important was missing. Where on Earth or Krypton for that matter are Superman’s manties!?!

The production crew was filming some CGI punch sequences but I got hit right upside the head by Cavill’s super-package. I understand dude can bend steel and see through walls and fly but did he have to have that superpower too. Now everyone down at The Daily Planet knows why the ladies in the typing pool are so intrigued by Clark Kent amirite!?!

I’m also curious as to why the dude in the background is wearing those dark sunglasses. I mean there’s no telling where those eyes may be focusing. And then there’s the measuring tape wielding camera lady who is all work as she maintains focus on Superman’s fist and not his other “attributes.”

The only kryptonite I can think of for the man of steel’s newly revealed secret weapon would be marriage. Anyways, here’s to Cavill sans manties and his power to bring many new fans to the comic book superhero fold.