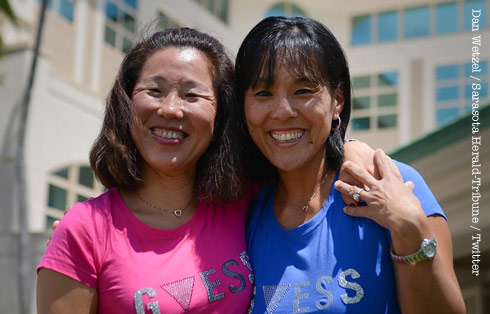 Even Hollywood couldn’t concoct a script as wonderful as the true-life story of sisters Holly O’Brien and Meagan Hughes.

As a young child in South Korea, Hughes was taken from her alcoholic father by her mother. In the process, Hughes’ older half-sister O’Brien was left in the care of her father.

When the father died after being hit by a train, 5-year-old O’Brien ended up in an orphanage in Pusan – 200 miles south of Seoul. In 1978, at the age of 9, O’Brien was adopted by a family from Virginia.

Hughes also has memories of a Korean orphanage but doesn’t recall much about her biological mother (O’Brien’s step-mom) or what happened to her. In 1976, Hughes was adopted by a family from New York.

Earlier this year, as revealed in an excellent write-up via the Sarasota Herald-Tribune, O’Brien got a job at Doctors Hospital of Sarasota as a nursing assistant. Just three months later, Hughes was hired to work at the same hospital and on the same floor. The sisters even shared the same 7AM to 7:30PM shift.

As they got to know each other after being introduced by a co-worker, seemingly coincidental anecdotes from their past began lining up. Eventually, O’Brien ordered DNA kits.

As she put it, “I was like, this is too good to be true. I said we’ve got to do the DNA test, it’s the only way we’ll get the truth out of the whole thing.”

When the results were returned, they came back positive. O’Brien told the outlet, “I’m like, this can’t be. I was trembling, I was so excited. I was ecstatic.” Hughes added, “When I heard from Holly, my first reaction was like, ‘Oh my god.’ I was in shock, I was numb. I have a sister.”

O’Brien wrote on Facebook after the story began circulating, “I really want to thank you all for your wonderful words of support. Today’s paper blew me away. I thought it was going to be a small article in the local section. I’m so excited. It has been a real roller coaster ride.”