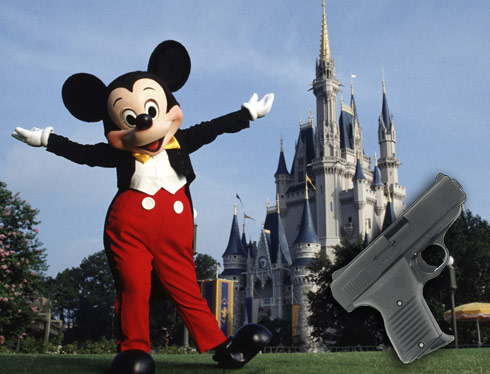 Disney World is a land of magic and mystery but for an elderly woman on Sunday it was also a place to randomly come across a loaded hand gun!

The woman was visiting the theme park with her grandson and discovered the pistol while they were enjoying the “Dinosaur” ride at the Animal Kingdom. After exiting the ride, the woman gave the hand gun loaded with hollow-point bullets to an attendee as her grandson announced, “My grandma found it on her seat.”

An investigation followed which determined that the firearm was owned by 44-year-old Angelo Lista who was visiting the park with his family. Lista, who was confirmed by The Smoking Gun to have a concealed weapons permit, told deputies that he earlier rode the “extremely bumpy” attraction and that his handgun “just slipped out” of his back pocket.

Lista explained that he passed through the security bag check area and that the issue of him carrying never came up. When he was asked why he failed to notify Disney Security about the Cobra .360 in his pocket he said he didn’t know he was supposed to, that it was not posted anywhere and that he was unaware that patrons were barred from carrying handguns.

Here’s a list of prohibited items inside the park via wdwinfo.com:

• Items with wheels, such as wagons, skateboards, scooters, inline skates, shoes with built-in wheels, two-wheeled or three-wheeled conveyances, strollers larger than 36″ x 52″, suitcases, coolers, or backpacks with or without wheels larger than 24″ long x 15″ wide x 18″ high (coolers required for medication may be stored in a locker or at Guest Relations), and any trailer-like object that is pushed or towed by an ECV wheelchair or stroller
• Alcoholic beverages
• Weapons of any kind
• Folding chairs
• Glass containers (excluding baby food jars and perfume bottles)
• Pets (unless they are service animals)
• In Disney’s Animal Kingdom Theme Park (for the safety of the wildlife), balloons, straws and drink lids are not permitted. Note: they now have biodegradable paper straws.

The gun in question was confiscated by the authorities but Lista will be allowed to retrieve it from the evidence room as long as he provides proof of ownership.