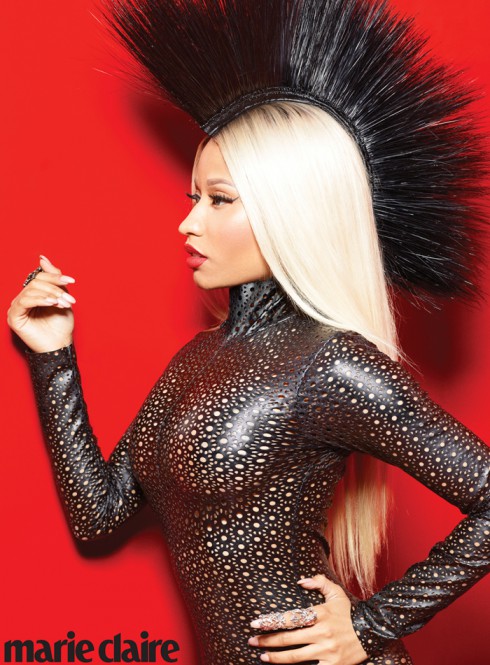 Nicki Minaj calls her fans “Barbz” and they even have their own secret language. Barbz is a reference to all the Barbie doll imagery she uses in her branding, and the “z” is there for some extra sass. Nicki’s take on Barbie is empowered, and a little deranged, I get the feeling that Nicki’s Barbie doll might literally bite your head off. This January Nicki discussed this special language she shares with her Barbz with Jimmy Kimmel, but still manages to not decipher much of it:

“My Barbz and I, we have our own language and ‘CF’ is something that we use to describe, I can’t tell you what it actually stands for — it stands for something — it just means something that has to do with people that wouldn’t necessarily know my old stuff, like people who would only know my ‘Starships’. It’s another word for [casual friends].”

The pop star covers Maria Claire’s August 2013 issue, and dishes out some pretty good advice with a lot of heart and wisdom. Along with all that she acknolwedges that many of her 16 million Twitter fans might not always know what she’s talking about with some of her more avid Barbz:

“I’m very aware that millions of people on Twitter have no idea what we’re talking about. That’s because we kind of have our own language. I used to think it was just a Queens language or a New York language or an East Coast language, but now it’s a Barb Nation language. I have South African Barbz, Japanese, German, Saudi Arabian. You can be a Barb wherever you live.”

Secret language aside, Nicki has an epiphany last year while she was touring.

“For the first time, I allowed myself to feel proud of where music had gotten me, and I felt an overwhelming sense of gratitude. You feel the need to pay it forward, which starts with analyzing yourself with a true desire to grow. I was praying every day, ‘You know what, Lord? I want to be a mom one day, and I want to start becoming the woman who I want to parent my child.’ I wanted all of the feelings of entitlement to leave me, because some people have this life for a year or five or 10 — and a lot of them lose it. I didn’t want to become a person who wasn’t enjoying the moment.”

Nicki! You’re going to make me cry! Usually you’re giving me that extra motivational anger to help me push through a workout, but now you’re inspiring me to be a better, more grateful person who enjoys the moment. I can’t take it.

Nicki also offered up a bit of advice for the young girls out there who might be distracted by their love lives:

“Don’t chase any man. Put your school first. Men love independent women. You don’t have to be a bitch, but there’s nothing wrong with it at times. And: Men are kids at heart. They want to be nourished and pet like a dog.”

Is Nicki Minaj getting her own reality show?

Nicki Minaj shares what her real hair looks like