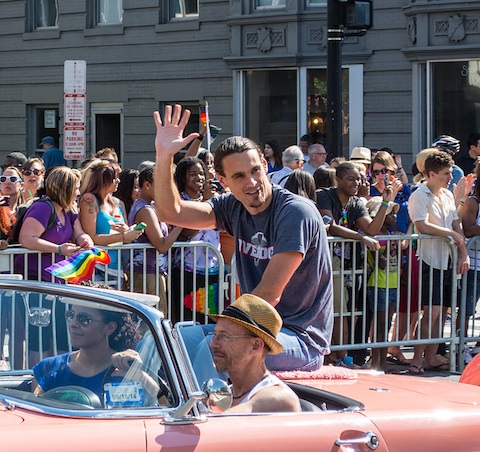 The Minnesota Vikings have suspended special teams coach Mike Priefer for the first three games of the upcoming season, due to a “homophobic statement” he made to two team members.

One of those team members, former punter Chris Kluwe, was later released from the team because of, as Kluwe alleged, his outspoken views on marriage equality.

Priefer apologized on Friday, and will be able to shave one game from his suspension if he attends anti-harassment, diversity, and sensitivity training.

Along with Priefer’s apology the Vikings announced that they will donate $100,000 to LGBTQ groups.

Kluwe spoke out about the incident this past January: he wrote an article for Deadspin entitled “I Was An NFL Punter Until I Was Fired By Two Cowards and a Bigot.”

The “Bigot,” according to Kluwe, was Priefer.

During his eight years with the Vikings, Kluwe set nineteen team records. He also remained an outspoken advocate for marriage rights. Here is another article he wrote for Deadspin in the late summer of 2012. Beware: the article has a NSFW headline.

However, the Vikings commissioned an independent review of Kluwe’s allegations, and no evidence was found to substantiate them.

Kluwe is working on a trilogy of science fiction novels now that he is unemployed as a punter. During a recent Reddit AMA, he said that his favorite novel is Ender’s Game, but that the novel’s author, anti-gay marriage advocate Orson Scott Card, is a “turd.”