I suppose I’m obligated to talk about this ridiculous “I’m A Celebrity, Get Me Outta Here!” show that premieres Monday night on NBC. (After all, the definition of ridiculous is “causing or worthy of ridicule.”) Bleh. It’s not as much fun shooting fish when a television network collects them in a barrel (or Costa Rican jungle) for you.

Here’s a summation of the show from NBC.com:

A groundbreaking, live event airing throughout the month of June it’s the ultimate “Swiss Family Robinson” as ten celebrities are dropped into the heart of the jungle to face fun and comedic challenges designed to test their survival skills. America is the puppet master, controlling their favorites by putting them into challenges and tasks to win food, supplies and luxury items. In each episode, friendships will be tested, hilarity will ensue and viewers will decide which celebrities stay or leave. While all participants will be playing for their favorite charities, the last remaining star will be crowned King or Queen of the Jungle, winning the largest share of the prize for donation.

(In case you’re wondering why these poor d-listers would embarrass themselves for charity, each is paid a large amount of money up front as compensation for “donating” their “valuable” time.)

Here’s a chart of all the contestants they’ve named so far (There is to be a tenth announced sometime between now and Monday) If America and me still care enough come Tuesday morning, I’ll update the chart by exing out whichever celebrity was eliminated the night before. 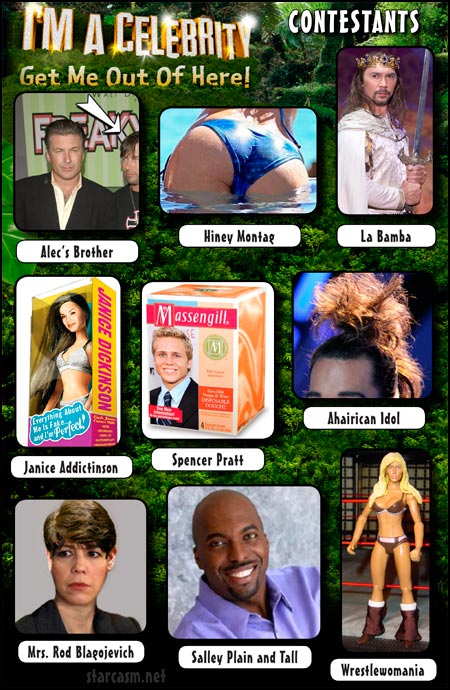 NBC’s names differ a little from mine, so to clarify here are the translations:

I think John Salley is actually pretty cool, although watching him participate in the latest dignity-robbing component of television’s least-common-denominatorization of the medium might change that forever. Even so, starcasm is officially endorsing Salley Plain and Tall FTW! (Unless it turns out that Janice Dickinson is always like this video clip – just scroll down after jumping – in which case I won’t be able to fight off being smitten with that drunken stuporific perfection!)

****UPDATE 6/1/09 – The tenth contestant is actually the tenth and eleventh (and close to twelfth). NBC decided to further test the extremes of elasticity for the word “celebrity” by filling out the I’m A Celebrity Get Me Out Of Here roster with the comedy duo of Frances Callier and Angela V. Shelton of The Second City. The duo goes by the name Frangela and that is all that is known about them. My guess is that they were trying to fill the slot of sassy black woman and these two were the most “famous” they could find dumb enough to do it. (Usually inherent in sassy black women is an aversion to such things as camping, eating bugs and Heidi and Spencer) Here’s a photo of the duo: 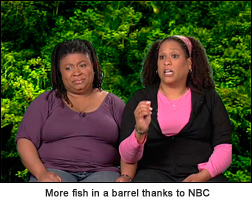 Bleh – this is celebrity blogger 101 stuff. Us sophomores have no time for such freshman fare!

****UPDATE 6/2/09 – Since Speidi finally walked off the show for reals after having to touch some creepy-crawlies, there was no elimination today. Hiney and Douchey are the biggest celebrities in the world with lots of monies, and there is not enough dry shampoo in the world to help them cope with being forced to hang out with nobodies like Lou Diamond Phillips and Janice Dickinson.

Move Over Mega Shark Versus Octopus, Meet Sharks In Venice!