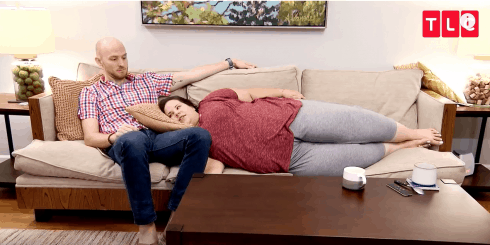 In a preview clip Whitney and Tal are lounging on a coach when Whitney says “I used to be more scared of babies than I am now.”

Tal points out that most parents say that no one ever feels ready for a child but “you somehow just make it happen.” Whitney then points out that Tal wants a baby, and he agrees that he does want kids.

Whitney, who’s resting her head on a pillow on his lap, then takes this as an opportunity to ask Tal if he would coparent a child with her since he wants children and is planning to be her roommate.

Tal seems taken aback by Whitney’s request. “First I just thought I was moving in and now you’re talking about adopting a baby!” he says, his body language showing he’s very uncomfortable with the boundaries that are being pushed.

Whitney goes on to assure Tal that the adoption wouldn’t be “official” on his end. Instead, it would be “just like how you take care of the cats sometimes.”

“It’s a pretty big jump to go from taking care of cats to taking care of a baby,” Tal points out. Soon, though, he seems to be warming up to the idea because he fears that otherwise he may never have children. “What if this is the only way that I can have a child?” he says. “It feels kind of crazy, but I think I want to!”

In interview Tal says that he feels like he’s put too much emphasis in his life on finding the right romantic partner to start a family with and now he feels he should rethink what family means and raise a child with his friend Whitney.