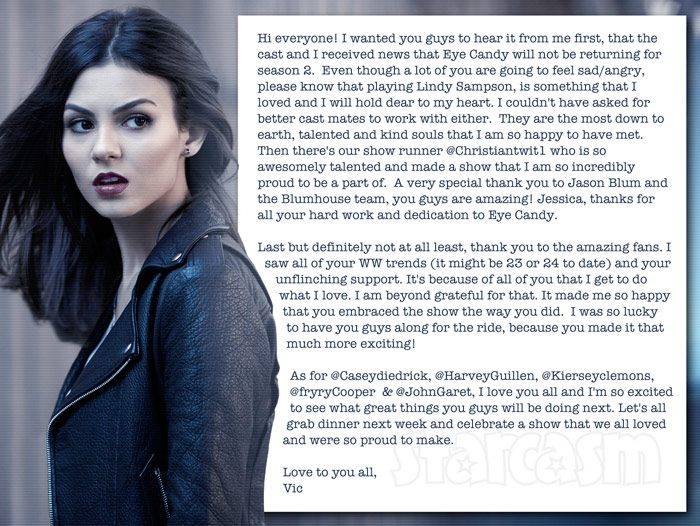 MTV has officially canceled their highly-publicized one-hour thriller drama Eye Candy after just one season. Show star Victoria Justice officially broke the news to fans with a statement over the weekend, and since then, other cast members have also responded to the news.

Hi everyone! I wanted you guys to hear it from me first, that the cast and I received news that Eye Candy will not be returning for season 2. Even though a lot of you are going to feel sad/angry, please know that playing Lindy Sampson, is something that I loved and I will hold dear to my heart. I couldn’t have asked for better cast mates to work with either. They are the most down to earth, talented and kind souls that I am so happy to have met. Then there’s our show runner @Christiantwit1 who is so awesomely talented and made a show that I am so incredibly proud to be a part of. A very special thank you to Jason Blum and the Blumhouse team, you guys are amazing! Jessica, thanks for all your hard work and dedication to Eye Candy.

Last but definitely not at all least, thank you to the amazing fans. I saw all of your WW trends (it might be 23 or 24 to date) and your unflinching support. It’s because of all of you that I get to do what I love. I am beyond grateful for that. It made me so happy that you embraced the show the way you did. I was so lucky to have you guys along for the ride, because you made it that much more exciting!

As for @Caseydiedrick, @HarveyGuillen, @Kierseyclemons, @fryryCooper & @JohnGaret, I love you all and I’m so excited to see what great things you guys will be doing next. Let’s all grab dinner next week and celebrate a show that we all loved and were so proud to make.

Love to you all,
Vic

After Victoria’s statement, other cast and crew members shared their reactions as well:

Thanks @dannyzacc 4 all the laughs. @mattymcd for knowing all my #strangersWithCandy jokes. I feel like I'm giving my Oscar winning speech

Want to thank all of you for your support and looking forward to sharing news!! @mtveyecandy was amazing&a huge #blessing. #THANKYOU

I know we worked so hard and fought for it so hard but it's not going2happen we're told.. THAnKu all ur support!@EyeCandyBack @mtveyecandy

We don't know. Just know we won't get a second season. Thabkyou for all your support!!:) @tvdglow @mtveyecandy

Thanks @MTVEYECANDY @mtv @blumhouse 4a fun ride& everyone who supported us… You will perpetually stay in #wemisstheflirtualkiller mode !

My love to everyone who made @mtveyecandy happen. here's to great people collaborating on great projects. keep the love flowing, everyone!

A lot of fans are asking, “Why did MTV cancel Eye Candy?” The answer is pretty straight forward. Although Eye Candy did develop a fervent fan base, it never could seem to get any real traction in the ratings. After premiering to a disappointing 589,000 viewers on January 12, the show managed to pick up viewers slowly over the next few weeks. It peaked at 707,000 viewers for its sixth episode on February 16 before falling to 541,000 for the Season One finale on March 16. So not only were the numbers low (I’m guessing MTV was hoping for at least a million), but viewership was also on a decline.