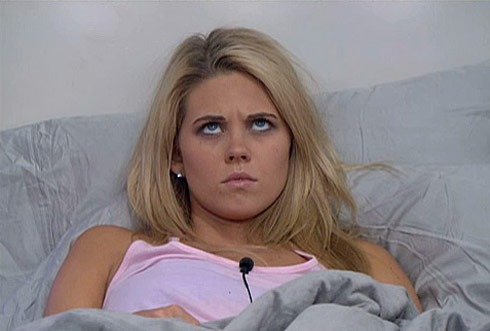 Aaryn Gries may have been saved from the chopping block during last night’s live eviction but her mom is certainly concerned about the real world axe that will drop whenever she leaves the Big Brother house.

Gries has made a ton of negative headlines for an onslaught of racist and bigoted remarks made while competing during the 15th season of the hit reality show. CBS aired a montage of all of her hateful statements and she’s become enemy number one for fans of the show.

As far as we know, she has no idea that she’s already been axed by her modeling agency nor does she have a clue as to just how much ire will be headed her way when she re-enters society. According to an extremely reputable source, The Los Angeles Times, her mom has stepped in and hired a PR firm to help with spin control for her maligned daughter.

Sources for the series said the mother of Gries, who lives in San Angelo, Texas, has already hired a publicist for the 22-year-old college student, making Gries perhaps the first contestant in “Big Brother” history to get representation while still living in the house.

Gries isn’t seen as much of a threat so she could last longer than people would hope as was highlighted last night. A new twist that certainly isn’t working in her favor, however, is that CBS has made America the MVP this week, meaning that viewers will have the power to decide one of the three nominees for eviction and I’m just about guaranteeing that it will be Aaryn.

Host Julie Chen has already addressed her hurt and anger at the things Aaryn has said and when Gries does leave the house, that moment when she sits down with Chen live to discuss her eviction will be must watch TV.

Is Big Brother’s Aaryn Gries getting a new modeling contract?