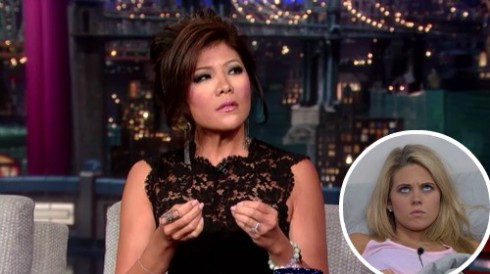 Sounds like the producers of CBS’ Big Brother missed the mark when casting season 15!

Julie Chen, the show’s host, revealed on The Late Show With David Letterman that Aaryn Gries was picked because producers believed she would fill the role of “America’s sweetheart.” Instead, Aaryn made homophobic, racist comments throughout the course of her stay in the BB house.

“She’s 22, she’s college-educated. It was shocking and it was astounding to watch because when she first got picked to be one of the housemates, we all thought, ‘Oh, she’s going to be America’s sweetheart.’ She’s a beautiful girl,” Julie told David on last night’s episode. “But you have to remember, it’s people trying to get picked. It’s kind of like a job interview, they’re putting their best foot forward. And it wasn’t until a couple weeks in the house that she said some pretty ugly things.”

Julie previously said she was “stung” by Aaryn’s comments, which included a racist slur toward Asians. Still, Julie told David there was something valuable to be learned.

“We think we’ve come so far when it comes to race relations and our views, but the fact that someone who is college-educated can move into a house where they all know… They all know everything they say and do is being broadcast live to the internet and intentionally getting on the network broadcast, to say such ugly things? That’s heartbreaking.”

Even though Julie did Aaryn the courtesy of avoiding her name on The Late Show, she did speak directly about their awkward post-eviction interview.

“I do applaud the fact that she said ‘I’m sorry if I offended anyone,'” Julie said. “But then she talked out of the other side of her mouth and she said, ‘But.’ Any time you apologize and there’s a ‘but,’ to me, it’s not a real apology.”

David concluded the segment by summarizing, “The great thing about freedom of speech is that it takes care of dumb people!”

Meanwhile, Aaryn is still sequestered away in the Big Brother jury house… And likely doesn’t know the real extent of the public backlash awaiting her on the outside.