Subsequently, her crown was pulled by pageant officials, who released a generic, morally upright statement condemning Lindsey’s actions. All of this with less than two weeks left of her reign! Brilliant publicity stunt? Ignorance? Our money’s on the latter, but if you leave out intentionality, it’s hard to deny the former. Certainly there will be a sex tape, reality show, and/or forthcoming album.

******EXCLUSIVE UPDATE!!! Starcasm.net paper-azzi are on the scene of what appears to be Miss Evans’ latest robbery! It seems she stole a “Beverly Hills Chihuahua” poster from the AMC 6 movie theater just outside of Shreveport. Here’s an image from the crime scene: 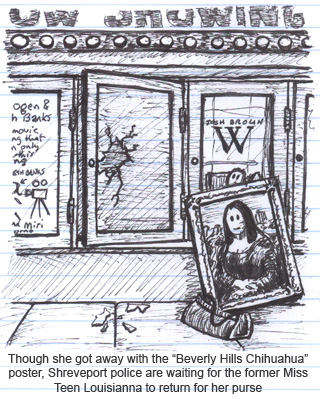