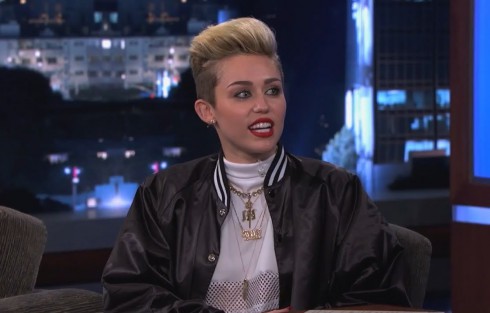 Miley Cyrus appeared on Jimmy Kimmel Live last night and her interview was very, let’s say, interesting. While Miley hasn’t exactly made her marijuana use a secret in the past, she opened up and got candid during last night’s interview.

“We’re more alike than you think … we’re very similar,” Miley told Jimmy of her and Snoop Lion, who she worked with on “Ashtrays and Heartbreaks.”

“That’s because he ‘s so high he doesn’t know what his name is,” Jimmy joked. But for Miley, it was dead on and she admitted, “Me too, so it’s fine! We both are. That’s why we get along so well, I guess.”

Also on the show, Miley opened up about her recent struggle with laryngitis.

“I had to actually stop and give myself some time, which I never like doing,” she explained. “I never take a second just to get myself better and focus on me. It’s amazing when you really treat your body right how quickly your body gets back into action. So I’ve been trying to just be really healthy.”

One thing Miley didn’t address was her recent online threat against her father, Billy Ray Cyrus. According to her since deleted tweet, Miley wrote, “Since you won’t reply to my texts I’m giving you an hour to tell the truth or I’ll tell it for you.” Along with the tweet, Miley posted a photo of her and an unidentified woman. After the tweet was made public, Miley said her Twitter was “acting all types of crazy.”