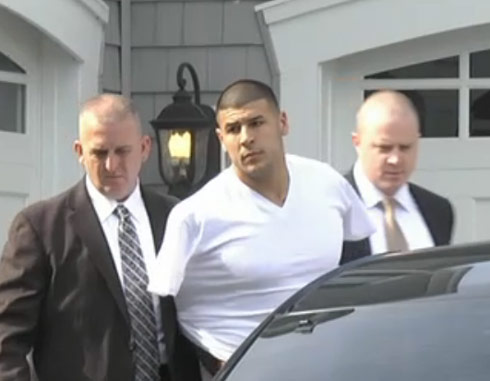 Aaron Hernandez was arrested and taken away from his home in handcuffs this morning after an acquaintance of the NFL star tight end was found dead near his home.

It took less than 2 hours for the New England Patriots to make a move as they have decided to drop Hernandez from their roster completely.

Hernandez was arrested by Massachusetts State Police, who obtained the arrest warrant, and was booked at the North Attleborough police station. Charges have not been revealed yet as authorities stated that they will wait to make that information public until his arraignment scheduled for later today at an Attleborough District Court. 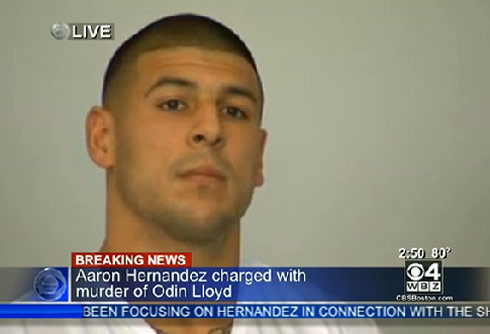 UPDATE: According to CBS Boston, Hernandez has been charged with murder. He is currently in court. The judge has ordered that he be held without bail.

The former Florida Gator and stand out tight end for the Patriots has been at the center of an investigation into the shooting death of 27-year-old Odin Lloyd.

Here was the official statement given by the Patriots:

“A young man was murdered last week and we extend our sympathies to the family and friends who mourn his loss. Words cannot express the disappointment we feel knowing that one of our players was arrested as a result of this investigation. We realize that law enforcement investigations into this matter are ongoing. We support their efforts and respect the process. At this time, we believe this transaction is simply the right thing to do.”

ABC news previously reported that this arrest warrant was coming and that their sources expect an obstruction of justice charge. They added that when police searched his mansion, it was discovered that the security system at Hernandez’s home, as well as his cellphone, were destroyed. Also, it’s believed that neighborhood surveillance cameras reveal Hernandez was with Lloyd and two other men just hours before the shooting took place.

Last summer the Patriots had awarded Hernandez with a 5-year, $40 million contract.