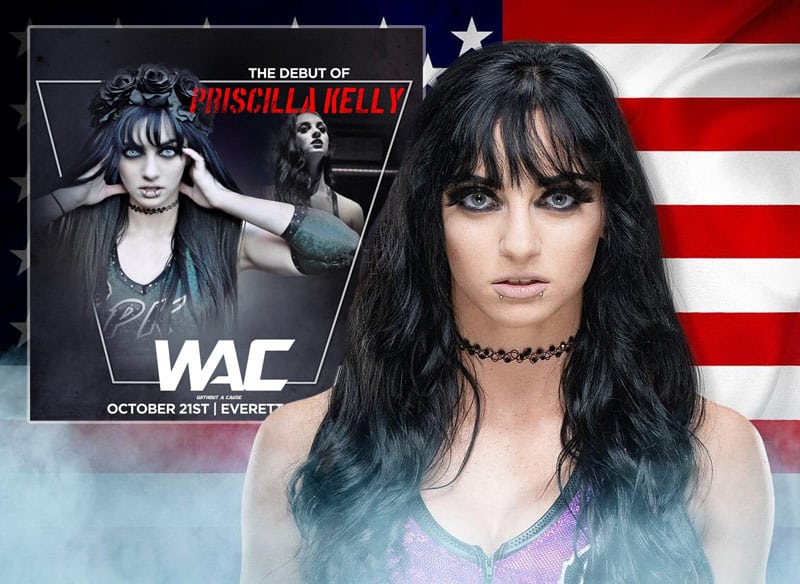 As we previously posted about, My Big Fat American Gypsy Wedding star Priscilla Kelly has since moved on to pursue a career as a fishnetted goth professional wrestler billed as “Hell’s Favorite Harlot.” As you might have guessed given her slogan, Priscilla is not opposed to stirring up controversy in the ring!

The professional wrestling world is all abuzz after Priscilla shocked those in attendance at a Suburban Fight event in late December by pulling out what appeared to be a bloody tampon from her wrestling hot shorts and then shoving it in the mouth of her opponent, Tuna Teeth. Before you TOTALLY freak out, please know that the tampon and the stunt was completely fake and just for show.

Regardless, video of the stunt made the rounds online and just recently went viral as a wide range of those associated with professional wrestling offered up their opinions — a lot of which seemed disgusted and unsupportive. (Click the link to watch the video, but be forewarned that it is exactly as described.)

I will start with reactions from Priscilla herself, who has zero regrets as she suggests there is a bit of a double standard given all the stunts that male professional wrestlers have pulled over the years: 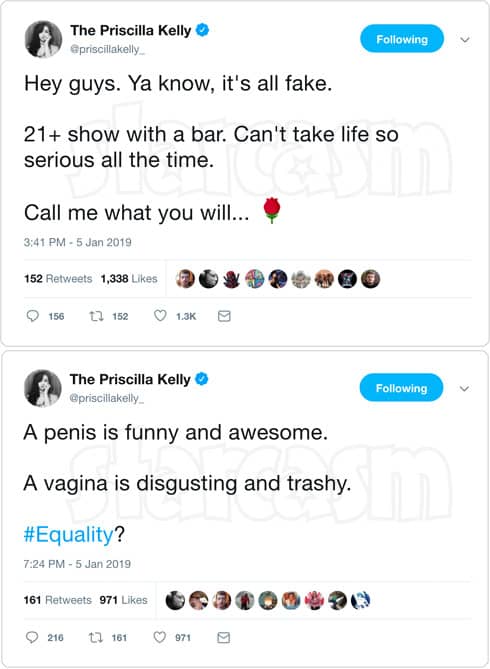 “Really had no intentions of going ‘viral’, I just thought it was funny. But thanks, guys!” she also tweeted.

Priscilla then debated a bit with people offering their takes on the incident:

TWEET: Fake or not, there are some lines you don’t cross. Disgusting and a career killer.

PRISCILLA: Career killers are things like racism, homophobia, and bad attitudes. None of which are in my body. There are many highly respected wrestlers who I have personally heard make racist or homophobic remarks, but that won’t be brought up.

TWEET: Please just Apologize now ok, so all this will go away. ☺

PRISCILLA: I’ll never apologize for being myself.

One of those who came to the defense of Priscilla is pro wrestler Joey Ryan, who is no stranger to pulling things out of people’s pants and putting them in somebody’s else’s mouth:

I would never censor anyone’s artistic creativity. To each their own. The telltale sign will be if it connects with an audience. If it finds an audience then can it really be considered wrong? If it doesn’t then it’ll die. You can’t stop change. Trying will only make you bitter. https://t.co/vS55SWUUEq

Would you say the same about Mae Young? Or is period blood somehow worse than placenta? Cause they showed that sh*t on TV. Honest question. https://t.co/njIQPxQ3DU

My concern wasn’t your opinion of the spot. Art is subjective and open to differing opinions. That’s part of the beauty of wrestling. My concern was your attack on Priscilla’s character, who is a friend of mine who works hard to entertain.

This take kinda summed up those supporting Priscilla in a humrous way:

I just saw the absolutely disgusting display of Priscilla Kelly shoving what seemed to be a bloody tampon into a woman's mouth in a "wrestling" match.

As a pro wrestling fan of over 2 decades, I cannot believe what I have seen.

Please do it again.

Photographer Justin Cotterell was in attendance at the event, and in addition to taking some AMAZING photos, he also offered up some amazing thoughts on the role of the shocking in art and/or professional wrestling:

Wrestling is an art, and people just react in different ways to art. If that spot caused people to cringe and be repulsed, then it kind of served it's intended purpose. I was there, and the crowd lost it. Hell, I almost dropped my camera out of shock. pic.twitter.com/s9TJuvOLia

Like I said, it's interpreted differently. There is no right or wrong answer with art. Iggy Pop threw himself into a table and cut his chest with broken glass in the 60s on accident, and it produced one of the most iconic photos ever and cemented him as a punk legend.

That last part of your statement is true, and hey… if it's not someone's cup of tea then so be it.

Foley pulled a sock out of his tights for years and shoved them in people's mouths. I think this has less to do with dignity and pride and more to do with people being afraid of periods…

If you honestly thought that was legit blood then there's some turtles living in the sewers who love pizza that you should know about.

It's all subjective. I think the underlying issue has a lot to do with its the fact that a woman did it, as opposed to a man. I've seen Joey do the lollipop spot dozens of times and people go crazy for it, whereas this garnered a negative one. It's a double standard.

The point is that you were supposed to be shocked and grossed out, which happened. If you hated it, then that's fine. Like I said, art gets interpreted differently. But you can't yell "that's not art!" because of that entirely subjective nature.

So what do you think? Was pulling a fake bloody tampon out and shoving it in another wrestler’s mouth during a 21+ live wrestling event taking things too far? Or is Priscilla just doing what a professional wrestler is supposed to do by getting the OMGs from the audience in an arguably entertaining way?

While you ponder that tamponundrum, here are some more amazing photos of the event from Justin Cotterell:

@suburbanxfight is a show like no other, with no rings and no rules. It's a wrestling show that honestly feels closer to a punk/metal show from the 70s or 80s. Keeping that aesthetic in mind, I aimed to make all of my shots retain that aesthetic through framing, light, and color pic.twitter.com/7xFuubhIC0

That guy who jammed his phone into my shot of @priscillakelly_ and Tuna Teeth sure has great taste in photographers. I bet he's on my website right now.
… Just kidding, I'm too lazy to have a website. pic.twitter.com/mK7w7UxBAL