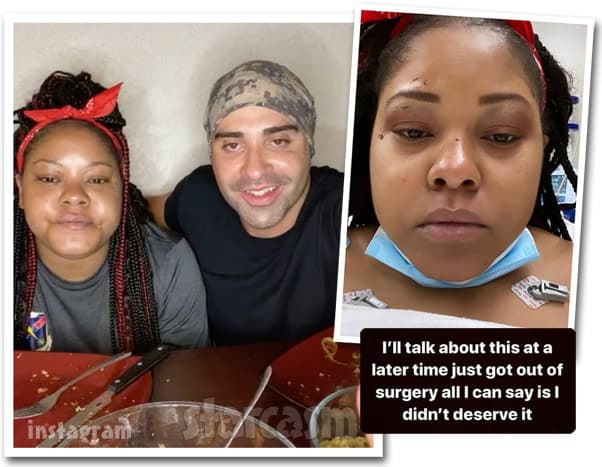 We have an unfortunate update for fans of Love After Lockup. Former cast member Vincent Gonzalez is currently behind bars in Las Vegas and facing a charge of domestic battery after an altercation with his fiancee Jerita that left her bloody and requiring surgery.

According to jail records, Vincent is currently behind bars at the Clark County Detention Center after being arrested on Monday. His bond is set at $3,000.

UPDATE – Records indicate that Vince has been released on his own recognizance. At this time the next scheduled docket is for a status check on the filing of a criminal complaint on October 6.

News of the altercation was first shared by Jerita herself, who posted a series of photos, text graphics, and videos in her Instagram story soon after the altercation. One of the videos showed Jerita on the scene of the incident with her leg in a tourniquet and elevated by a female police officer. In the video, the floor is covered in blood.

Jerita has since deleted her Instagram story posts, so it’s a little difficult to piece together an exact timeline. However, it appears as though she first posted about breaking up with Vince, before later posting about her injuries. So it could be that the couple split prior to the altercation.

Here are Jerita’s text statements from her stories that appear to be after a break up, but before the altercation:

😭😅😂👋 I’m single so release the bots and thots

Is this the part where I’m suppose to cry? 🤷🏽😅 child please you wanna treat a felon better than me call your next woman karma

Jerita then shared the bloody injury video and a series of photos taken in a hospital. Those were followed by more text statements:

I’ve never even placed a pinky on you smh

Vincent shared an Instagram post on the day of his arrest that suggests a break up. It included two video clips of people doing back yard karaoke to a Frozen song and this caption:

Let it go and move on. Move on gracefully.

Vincent also posted what looks to be a message from his dad referencing a prior altercation between Vince and Jerita: 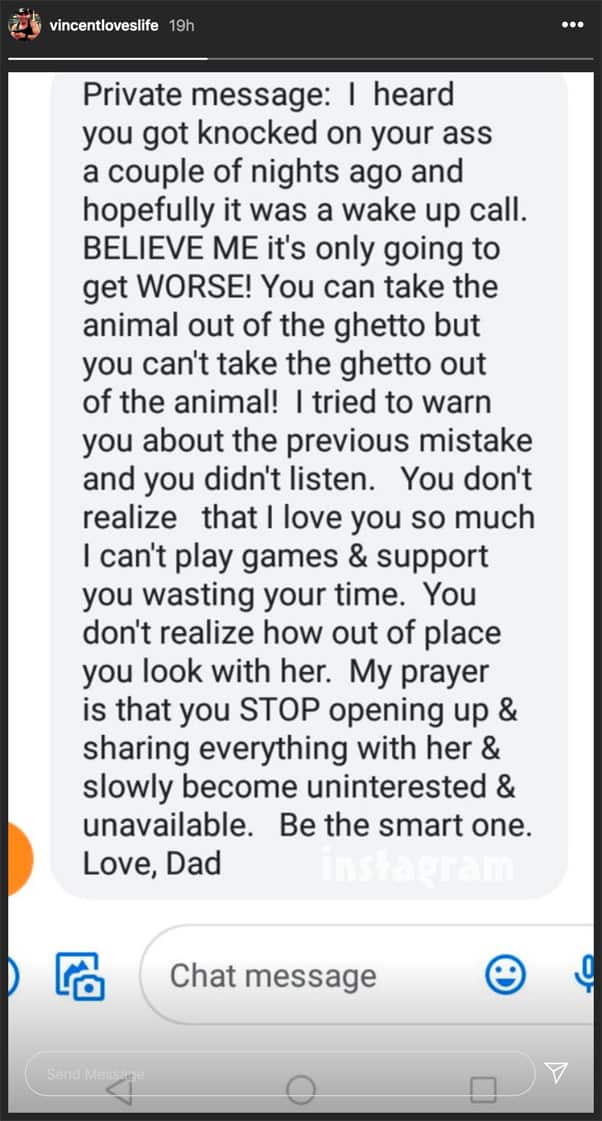 Speaking of prior altercations, it appears that there was at least one between the two.

Genevieve Bailey, who is a co-host of the “Amber’s REALITY Tea-V Cafe” YouTube channel (as well as the rumored girlfriend of Love After Lockup star Clint Brady), responded in a Facebook group about Vincent’s arrest with additional details.

“She had to have surgery last night,” Genevieve said of Jerita on Tuesday. “He has been using a certain drug for working out and just recently was physical to her and the cops had to be called and he went to jail that night as well.”

Genevieve later stated that the first incident was over a week ago and she says during that altercation Jerita “was thrown through a glass door.” Genevieve lives in Ohio, so she was asked how she new about the specific details.

“We are friends with Jerita,” Genevieve explained. “Especially my friend who called the police on the first incident prior to last night.”

I checked court records, and Vincent was previously charged with domestic battery on August 20. That charge was later denied after the DA decided not to prosecute.

Vincent and Jerita have been together since at least November of last year. He proposed in June and later shared a video of the proposal on YouTube:

If you’re a little confused as to who Vincent was in regards to Love After Lockup, he was the one who was dating Amber Eggers and who also adopted Amber’s prison cellmate Puppy.

LOVE AFTER LOCKUP Tyrice and Chanda spoilers: Are they still together?