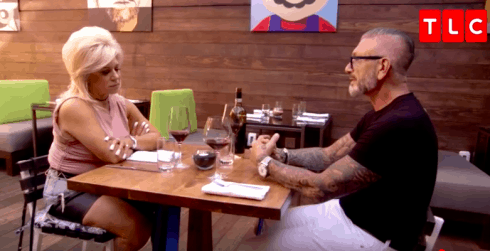 The 13th season of TLC’s Long Island Medium recently premiered, and sadly this year Theresa Caputo and her husband Larry are no longer together. Why did the pair split after nearly three decades of marriage?

The couple, who have two adult children, have been separated for over a year and told the world they were no longer together last December. This summer Theresa underwent knee surgery for a torn ACL without Larry by her side. “It was weird waking up and Larry not being there,” she said about waking up from surgery alone. “But this is our new life.”

Although the pair still maintain that they are friends and family, they seemingly haven’t been seeing much of each other. In a preview clip for the show the pair meet for the first time in a long time. Theresa even disclosed to Extra that the pair are living on opposite coasts of the U.S. now.

The split was initially a trial period, but the pair decided to go through with the divorce this April. Theresa was the one to file but it’s Larry who is now seeing someone else. He told TMZ: “I have moved on. I’m fortunate enough to say that I have met someone special. But I’ll just leave it for that now.”

“This is the first milestone, celebration dinner, without Larry,” Theresa explained on the episode. “And it’s hard today. This is all still very new.”

Theresa revealed to Good Housekeeping that sharing her divorce onscreen “isn’t easy,” but it’s something they decided to do when they embarked on this reality TV journey seven years ago.

So far the pair have shared very little about why their relationship broke down. All Theresa has disclosed was that the marriage simple “wasn’t working.”

Was Noah Cyrus and Lil Xan’s relationship fake and set up by their record company to sell a song?

Is Scott Eastwood dating anyone?