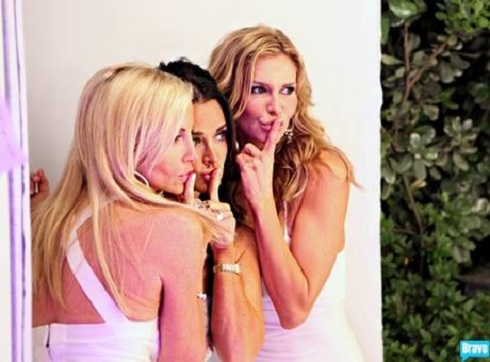 Real Housewives of Beverly Hills‘ third season is coming soon and new official housewife Brandi Glanville has allegedly taken her bad girl ways to a new level! Fans may remember Brandi going head-to-head with Kim Richards at last year’s White Party. Well, this year she was once again at the center of attention at the annual bash, and you’ll never guess what she did this time.

The wild housewife was allegedly caught with her panties down in Kyle Richards’ bathroom — and no, she wasn’t just using the toilet. “Brandi was in the bathroom with a guy having sex when the girls caught her,” multiple sources tell Radar Online. “They couldn’t believe that she was doing that and they were all stunned when they found her.”

Brandi has never been shy about her hook-ups, but this really takes the cake. “The crew thought it was hilarious and would really make for great TV, but who knows if they’ll ever air that,” another source said. IF they’ll air it? Does anyone really think that Andy Cohen would look at footage like that and turn it down? Doubtful. 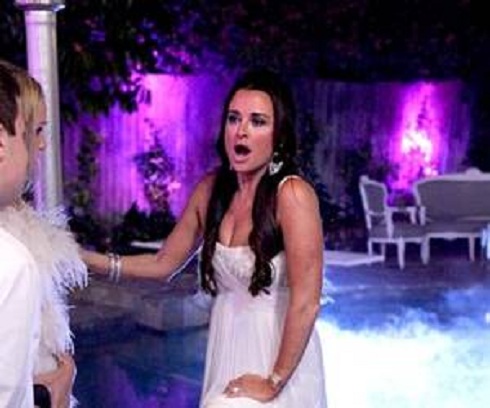 Kyle, who recently underwent full body lipo, was horrified that Brandi would hook-up at such a classy party — and in her bathroom none the less. “Poor Kyle planned this gorgeous party and her guests were acting like total hicks the entire night.”

No wonder Taylor got (allegedly) totally wasted! I only hope Kyle Richards had her trusty laser pointer when randy Brandi was discovered!

This isn’t the first time Brandi has caused a commotion. During the ladies’ trip to Las Vegas, Brandi was reportedly heavily intoxicated for most of the time and her bickering with the other ladies continued for the entire trip. Plus, things between her and Adrienne have gotten so heated that lawyers have been brought in.

Real Housewives of Beverly Hills season 3 is going to be the wildest season yet — especially if it includes a clip of the scene we just mentioned!