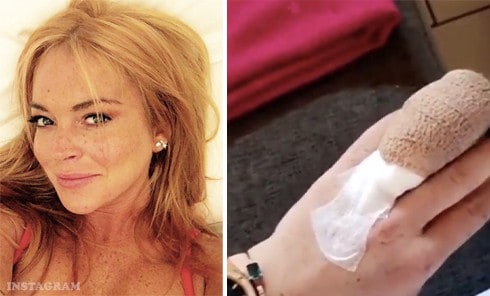 While the Twittervese celebrated Mean Girls Day, the most famous star from the film spent her time healing after severing half of her dang ring finger off in a freak boating accident!

Lindsay Lohan was enjoying a little fun in the sun on Sunday off the coast of Turkey when she attempted to yank up a boat anchor… Her hand got caught up and the momentum pulled her into the water. While working to to free herself, the anchor took off nearly half of her digit!

Luckily, if you can use that word in this instance, Lohan’s filleted finger portion was found on the boat by some buddies. She was rushed to an area ER where a plastic surgeon reattached that bad rascal.

TMZ has the full graphic images if ya really wanna. In their report they said Lindsay’s ivory tickler got “chopped” off. Even down a hand, the actress managed to correct that statement:

To make this very clear. The bottom part of my finger was ripped off. It was not "chopped" or "severed" off.

One sip of alcohol could land Lindsay Lohan in jail