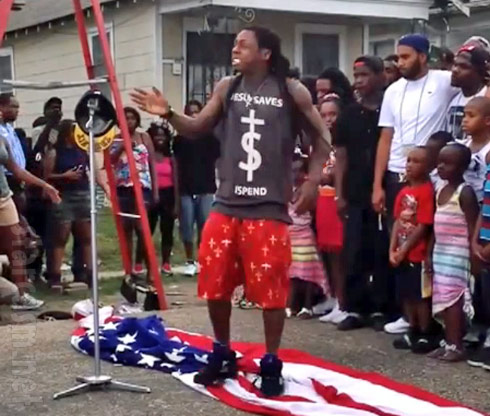 Rapper Lil Wayne has never shied away from speaking his mind. Continuing this trend, a recent video has surfaced of the 30-year-old on the set of his music video for the song “God Bless Amerika” in which he appears to purposefully trample the American flag.

At the beginning of the following footage, which appears to be shot from a cellphone of a bystander, Wayne stands in front of an American flag. The Stars and Stripes are dropped revealing a group of stoic people behind it. As the song plays over a loud speaker, Wayne lip syncs the lyrics while boot stomping the flag.

Some have argued that Wayne treading on the flag was an accident, but he certainly appears to look down and to be well aware of what he’s doing.

“Amerika” appears on Lil Wayne’s 10th studio album I Am Not A Human Being II.

The desecration of the American flag for protest has been a long-standing tradition for both foreigners and U.S. citizens wanting to provide a striking visual to coincide with a public airing of grievances. It’s always been a hot-button topic socially and politically and this latest example from Lil Wayne is no different.

Here are two comments from YouTube viewers of the clip that express opposing sides of the issue:

Yeah, nothing to see here but a piece of cloth built on lies and murder while at the same time represents freedom an equality(or so they try to make u believe). Symbolism is a powerful thing, I advise people not to get caught up in it.

Get off the flag. So disrespectful. He has sh*tty music and he pulls a f***ing stunt like this? He is dishonoring the country and the men and women who devout their lives and sacrifice a lot for our freedom.

Here are some of the lyrics from the song for context:

Yeah, God bless America
This so Godless America
I heard tomorrow ain’t promised today
And I’m smoking on them flowers, catch the bouquet

Two questions… Do you think Lil Wayne was accidentally walking on the flag after it was staged to drop and reveal the people behind it? If not, do you take offense to the way Wayne is expressing himself?