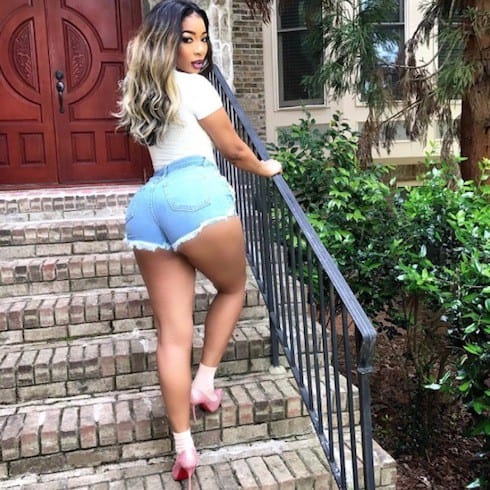 Love & Hip Hop Atlanta‘s Tommie has had an interesting run on the show since we exposed several dozen of her mug shots and criminal records during Season 5. This season, her struggles with alcohol abuse have taken center stage; by Tommie’s own admission, almost all of the high-profile mistakes she’s made in the last two years came when she was drunk (or high), but she’s also working to establish her own brand of wine.

So it wasn’t entirely surprising when, yesterday, Tommie got drunk and started mocking her ally (and former crime boss) Karen King on social media. What was surprising, though, was the depth of Karen’s response. First, she took to Instagram to share a string of messages dragging Tommie hard. Unfortunately, we have to censor all the swear words–but the sheer number of tiny Karen censors alone shows how angry KK was: 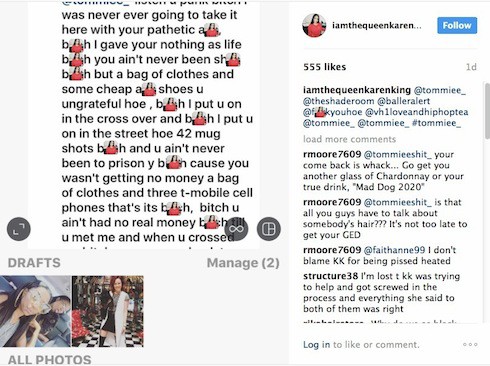 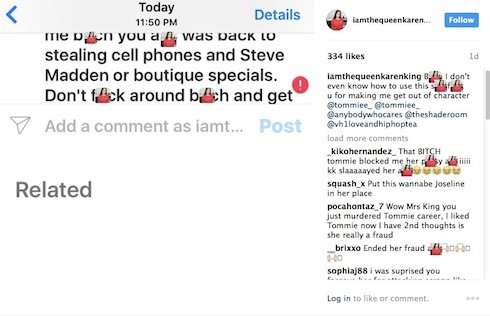 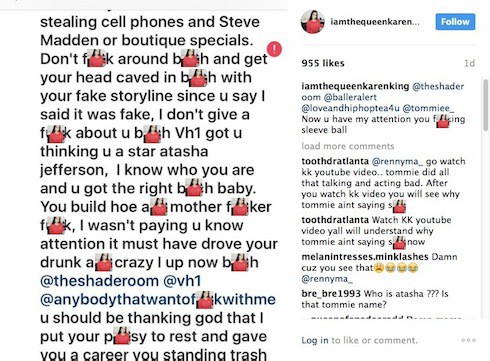 Shortly after that, Karen updated her Instagram page again, this time with a video of herself on the way home and promising a complete “takedown” of Tommie at exactly 1:15 PM:

This is to everyone that watches Love N Hip Hop that loves Miss Tammy I mean a.k.a. a Tasha Jefferson I will be addressing that bitch at 1:15 don't miss this will be better than Love and hip-hop I'm driving so some of the words are spelled wrong

And Karen delivered. Thanks to the resourcesfulness of LHHATL fans (and the magic of YouTube), we now have the Karen King exposes Tommie full video clip. Get comfortable before you watch–it’s sixty-three minutes long, and there’s a *lot* of vinegar in her tea:

Among the many highlights: At the 12:09 mark, Karen starts talking about the “$13,000 surgery that [Tommie] got for free,” and says she could put Tommie in jail by revealing “how [she] pays for all that.” (It may be worth noting that Tommie and Karen have both been arrested for credit card fraud before–in fact, Karen is awaiting trial on fraud charges stemming from an arrest last summer.)

“They need to remember your face,” Karen adds. “But they can’t, because you get so much surgery, if they see you today, b!tch they don’t know who you are tomorrow.”

Ultimately, Karen sounds befuddled. In her conclusion to that particular bit of gossip–and not for the last time in the full video–she says, simply: “Cut it out! You’re in a position to win! Why are you takin’ a b!tch that helped you? Why? Why are you attacking me?”

Love & Hip Hop Atlanta Season 6 is still filming, so it’s possible that the fallout from the Karen King Tommie video could make it into the season before the reunion airs. If not, it will definitely turn up the heat on the two-part reunion special, expected to air in early July.

S.C. teacher accused of having sex with three students on same day