According to hollywoodreporter.com, Laura Leighton will be returning to Melrose Place as Sydney Andrews on the CW’s remake of the series. Sydney has somehow survived being run over by a car on her wedding day in the Season 5 finale to take over as landlady of the most attractive, shallow and dangerous apartment complex in the world. 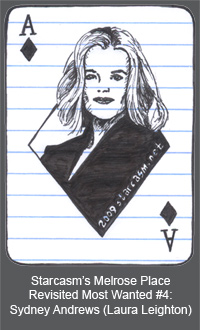 Due to a combination of embarrassment and lack of enthusiasm from the rest of the interwebs I’ve had to abandon my overly ambitious project of constructing a Melrose Place Revisited Most Wanted deck of cards. Similar to the Iraqi most wanted cards, I was going to reveal my rankings of which original cast members I’d most like to see come back to the revisited series on The CW. For example, Heather Locklear is the Ace of Spades, Grant Show (Jake) is the King of Clubs, and so on. That being said, I think this announcement justifies one more card reveal!

Sydney was the consummate Melrose Place resident with a resume that included, but wasn’t limited to: marrying her brother-in-law, attempting to kill her sister, a hundred separate instances of blackmail, joining a cult and being a madame. During the hey day of the show, if you missed an episode, the first question you would ask your friends the next days was, “Ooooo – what did Sydney do?!?” Leighton handled the role perfectly, creating the innocently evil Ace of Diamonds in my countdown, which places her in fourth place behind Amanda, Allison and Billy.

No doubt that if the show were still on the air, Sydney would be running the place, so taking over Heather’s role as the matriarch of Melrose Place seems a perfect fit. In my mind it serves to cancel out the fact that Ashley Simpson-Wentz will be on the show, which will of course mean an inevitable appearance from her uber-douche husband Pete Wentz. So, if the CW’s goal was to get old Melrose fans to tune in for at least a couple episodes, then the casting of Leighton was a success as far as this fan goes!

****UPDATE 4/7/09 – Another former cast member is returning to Melrose Place! And it’s another one of my favorites – coming in just behind Sydney as the King of Spades – Dr. Michael Mancini! People reports that actor Thomas Calabro will be reprising his role as the masculine counterpart to Sydney – equally self-motivated and evil, just a little bit dumber. (He’s the brother-in-law I mentioned earlier that Sydney married) People Magazine says, “Calabro, who appeared every season in the original Melrose, will be the father to David Patterson, played by Shaun Sipos. No other details were revealed.”