Grant Show is emphatic about the fact that he WILL NOT be a part of the new Melrose Place revival show planned by the CW. In our post where we outed ourselves as MP fans we pretty much assumed that since Grant is actually working these days, they probably couldn’t afford him. (He’s bound to be making at least $7.50/hour playing that minor role on Private Practice) That’s OK. Melrose doesn’t need to have a motorcycle ridin’ rebel without a clue character, anyway. Perhaps they could replace him with a douchey, always shirtless surfer dude that keeps naked pictures of himself under his mattress. I think Matthew McConaughey is available. 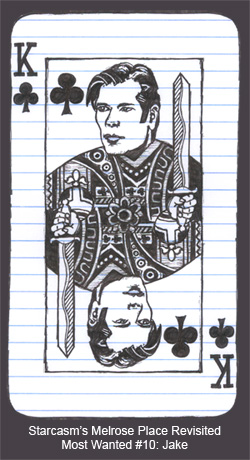 This is the first official announcement one way or the other about casting for the revived Melrose, and we’d like to start something we hope to continue for the next few months. In the tradition of the Most Wanted Iraqi playing cards, we’ve created our own deck for who (or what) we want to come back to Melrose Place. We start with the ace of spades (the most wanted) down through the two of diamonds (least wanted). We will reveal the cards one or two at a time for the foreseeable future, hopefully culminating with the CW’s announcement of who’s coming back. That being said, we can officially scratch the King of Clubs from the list.

3 contestants revealed for Dancing With The Stars Season 14