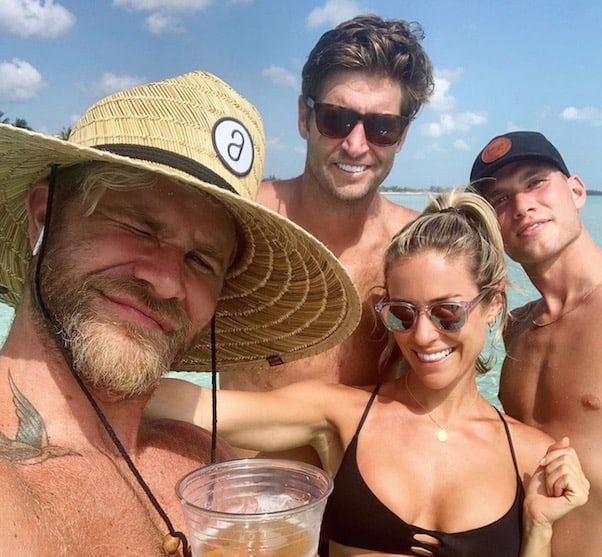 The increasingly bad, downright puzzling look that was the Kristin Cavallari and Jay Cutler Bahamas vacation came to a quiet end yesterday, as the couple and their influencer traveling partners arrived back at home for (presumably) a long quarantine. Yet unanswered is the key question, one that I feel really can’t be asked forcefully enough: Why were Kristin and Jay on vacation for so long in the middle of a global pandemic?

The couple’s prolonged beach trip has been getting increasing attention from gossip blogs over the last few days. But it was freelance and comedy writer Claire Downs whose viral Twitter thread on the topic really structured and solidified the timeline of this story, in the process highlighting exactly how absurd — and, again, just bad from at least a PR standpoint — the whole thing really is.

Before I get into this, I need to actually plug Claire’s original thread one more time, if only because some sites are ripping off her work. Also, her tweets go into more detail than I will. (And they have better jokes.)

So — now that I’ve pulled the rug out from under myself, let’s begin. On March 15, Kristin Cavallari shared her first photo update from the Bahamas: 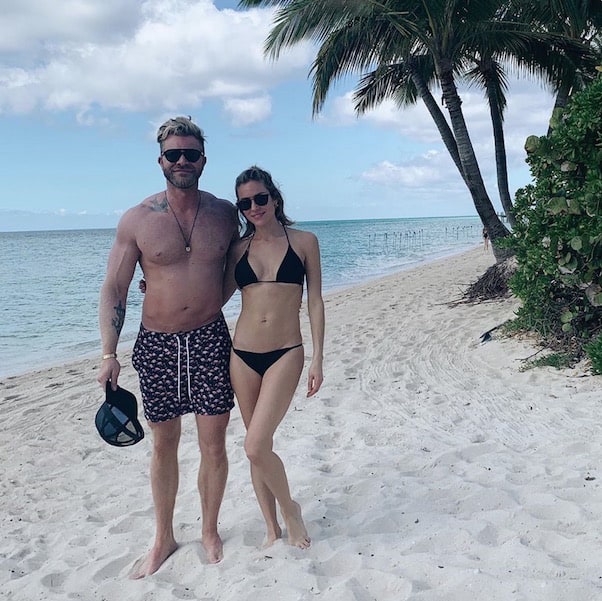 “”Modern family spring break,” Kristin captioned the photo, in which she’s posing alongside her friend and hairstylist Justin Anderson. At the time, the US had 3,501 confirmed cases of coronavirus, and 62 Americans had died from the disease.

Two days later, on March 17, Justin shared the first photo of all four adults along for the trip: himself, Kristin, Jay Cutler, and Anderson’s fiancé @rhodesaustin, otherwise known as Scoot. 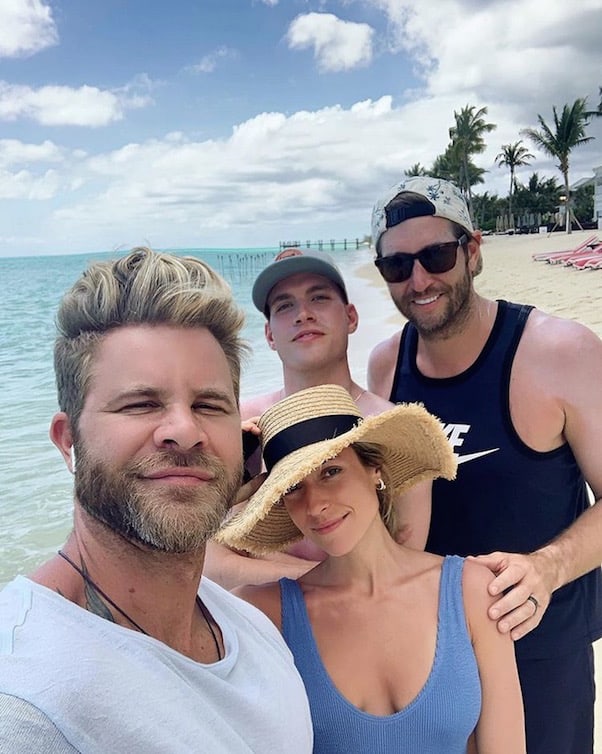 “Being stuck on an empty island and forced to quarantine could be worse,” Justin wrote. “Thankful for my wolf pack during these scary times. this is where we are, this is us staying positive. we couldn’t be social here if we tried ✌? i am afraid of what we will go home to when they let us back into the states ? hope you’re all staying safe where ever you happen to be ♥️”

On the day Justin wrote that, there were 5,664 coronavirus cases and 97 deaths in the US. Meanwhile, the Bahaman government was working to enforce isolation among its population. On March 20, Dr. Hubert Minnis, Prime Minister of the Bahamas, issued an order instating a 9 PM to 5 AM curfew and suspending all but essential businesses, which included: “wholesale or retail grocery stores and farmers markets; pharmacies, gas stations, laundromats and wash houses for hygienic purposes from 6am to 5pm; banks from 9am to 5pm; construction companies doing construction work from 6am to 7pm; drive through or take-away food vendors from 6am to 7.30pm, doctors offices, hospitals or medical facilities, medical supply establishments, hotels and airports.”

The last inclusion on that list is especially important, because it was also around March 20th that both Justin and Kristin began suggesting they didn’t know when they would be able to leave the country and its gorgeous, now nearly deserted beaches behind. Lynden Pindling International Airport in Nassau, the largest airport in the Bahamas and its primary commercial hub, never closed to outgoing flights. In fact, as of this writing, the airport is still open for “international outbound commercial passenger flights.” So it looks like the foursome could have left their beach resort…anytime?

What they did instead was keep up their paid social media posts. Kristin continued to promote several brands and companies on Instagram over the next week, including her own reality show Very Cavallari, a personal trainer / workout routine, Kristin’s partnership with a new media promoter, and her and Justin’s fashion brand Uncommon James. Justin did the same. 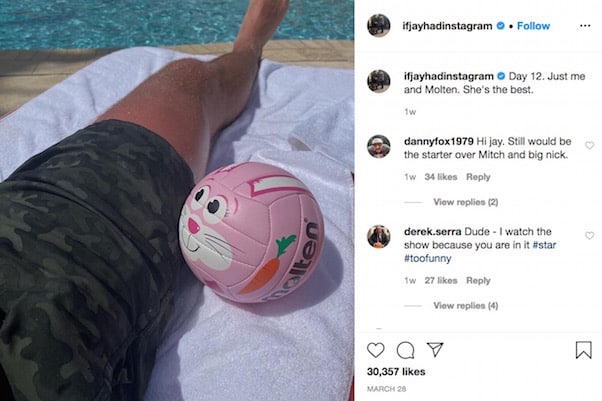 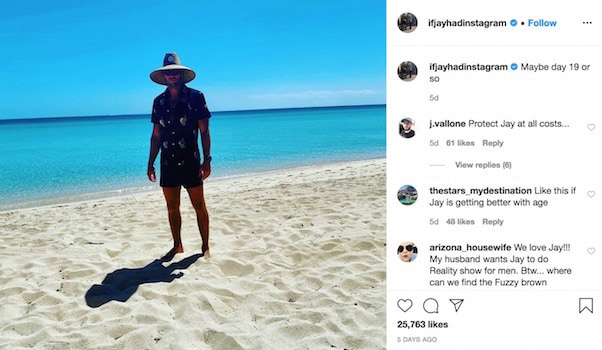 However, the Bahamas did close all *ports* to international travel on March 24th. In doing so, the Bahaman government urged international visitors “to immediately work with their airline to make travel arrangements to safely return home.” The US Embassy echoed that suggestion, advising “U.S. citizens who need to return to the United States…to do so immediately using any remaining available commercial means.” Failure to do so, said the Embassy, would result in those people “remain[ing] abroad for an indefinite period of time.”

Evidently Kristin & Company were just fine with an indefinite beach vacation, because the next same day Kristin shared a (paid) beachside workout vid. By March 25, the United States was reporting 64,916 cases of COVID-19, along with 906 deaths.

Within a week, enough eyebrows had been raised & tabloid articles been written about the Kristin Cavallari and Jay Cutler Bahamas trip that the group’s tone began to change. By early April, Justin began responding to the occasional comment on his Instagram feed with suggestions that the Bahamas were actually much safer than the United States. Which was technically true — so far, the Bahamas has registered three dozen coronavirus cases, and six deaths — but also beside the point.

“I don’t want to complain bc people will judge,” Justin added, implying that maybe people weren’t already judging? On that note, you can judge for yourself; here’s a pair of Justin’s defensive replies: 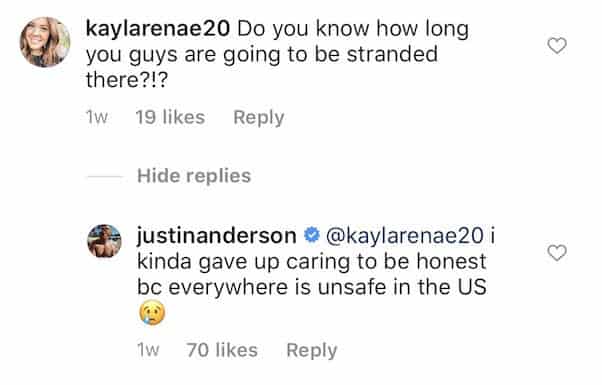 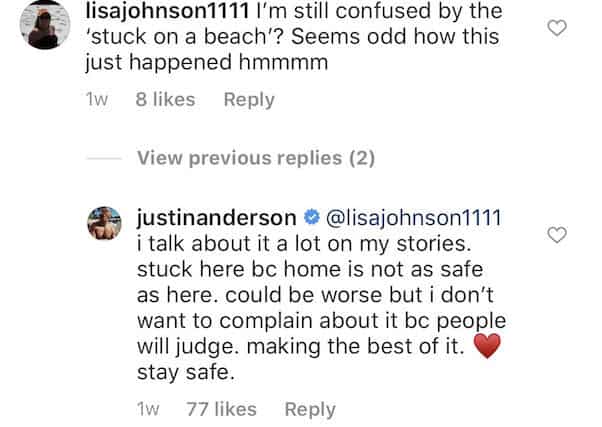 And by the evening of April 6th, when the number of cases and deaths in the United States were 362,955 and 10,748, respectively, the four had finally made it back to their respective homes. Kristin’s final post from the Bahamas (another workout clip) came earlier the same day. According to the Department of Homeland Security’s latest guidelines, none of them will be required to undergo a fourteen-day home quarantine, since their trip was to a country not on the watchlist.

In sum: no, the Kristin Cavallari and Jay Cutler Bahamas Coronavirus Beach Jamboree didn’t break any laws (that we know of). Nor did Kristin and Jay contract COVID-19 (that we know of). But posting pictures of and slinging advertisements based around a tropic beach frolic in the middle of the most panicked and paranoid era in modern history is thoughtless, to say the very least. Plenty of celebrities have managed to drum up good headlines for themselves while stuck at home. If nothing else, the couple is guilty of all the celebrity stereotypes they’ve been accused of representing for years. Plus, the Smokin’ Jay meme hasn’t bee this accurate since its inception.