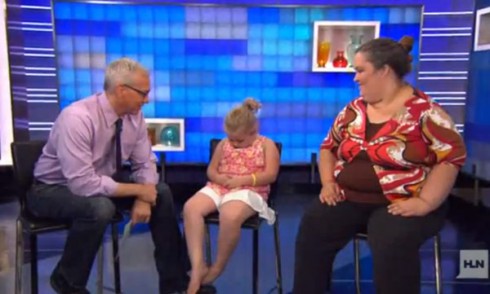 Alana Thompson (aka Honey Boo Boo Child) spent her Fall break from second grade on a media junket. She must have stayed busy, because the footage just keeps coming. A recent installment came from an interview with Dr. Drew, and it has been generating some controversy.

In the clip below, an uncooperative Alana decides to feign sleep in order to avoid Dr. Drew’s questions. Mama June tries to bargain with her a bit to get her to behave, but Alana isn’t having it. Finally, Dr. Drew uses his therapeutic super powers to “wake” her up, and Alana blurts out an answer to one of his questions.

June coaxes Alana a bit to get her to answer.

Dr. Drew asks her why, and Alana responds “Because fans come up to me, and I hate it.”

Ouch. Alana doesn’t like being on TV? Alana doesn’t like her fans? Alana is tired of being of TV, and June should let her off the hook. That’s what folks are saying all over the internet today. Here’s the US Magazine story and here’s what Huffington post has to say.

I’m not buying it, though. First of all, Alana seems to come alive in front of the camera (most of the time). Secondly, June is too protective of her daughters to put any of them into a situation that she thought might be harmful. So, what’s going on?

It was good to see Mama June getting out in front of the controversy by issuing a statement today on Facebook. Many outlets might not pick this up, since it isn’t as juicy as the suggestion that a mother might be exploiting her little girl; but it rings true to me. 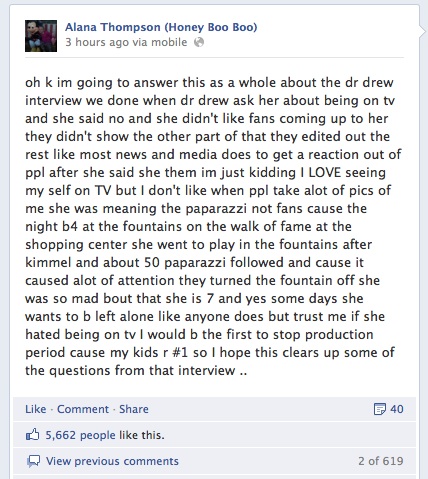 Let’s break this down.

According to June, (1) Alana’s answer was cut off and the rest of it included positive comments about being on TV and having fans; (2) just the night before, she had been playing in a fountain when the paparazzi and the fans they attracted caused the fountains to be turned off and put an end to Alana’s play; (3) she’s 7 and she gets tired sometimes; and (4) if she really didn’t like being on TV, they wouldn’t be on TV. 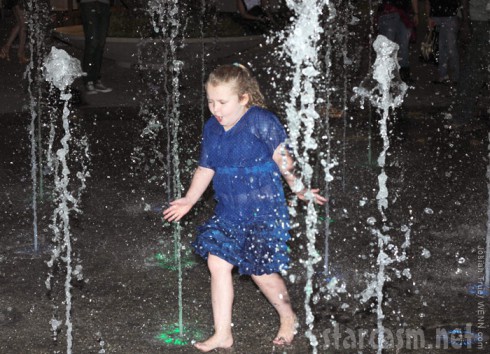 Anyone who has followed Alana’s recent interviews could tell that she didn’t quite have the spark that has made her show famous. She had the “sass,” and plenty of it in this interview with Dr. Drew and all the others; but, she doesn’t seem to be having quite as much fun. For folks already ill disposed, Alana’s less sunny demeanor opened the door to criticisms of the family and the show. For fans, it also raised some concerns over whether Alana was truly OK with her new life in the limelight. But, maybe, we should all take a deep breath.

Maybe, just maybe, 7-year-old Alana was tired. Maybe the four-hour flight wore her out a bit. Maybe running from one interview to the next for 3 days wasn’t quite as glamorous as she thought it might be. Maybe getting her play time in the fountains cut short made her angry, and she was still a little raw about it.

The full interview will air on October 23rd at 9 pm on HLN. Perhaps the unedited (less edited?) version of Alana’s comments will clear it all up. Perhaps not. I’m still giving June the benefit of the doubt, though. I think June is a wonderful mother. If Alana really is ready to quit (and I don’t think she is), then we’ll all know about it soon enough. Maybe y’all haven’t noticed, but Alana tends to speak her mind.

oh k im going to answer this as a whole about the dr drew interview we done when dr drew ask her about being on tv and she said no and she didn’t like fans coming up to her they didn’t show the other part of that they edited out the rest like most news and media does to get a reaction out of ppl after she said she them im just kidding I LOVE seeing my self on TV but I don’t like when ppl take alot of pics of me she was meaning the paparazzi not fans cause the night b4 at the fountains on the walk of fame at the shopping center she went to play in the fountains after kimmel and about 50 paparazzi followed and cause it caused alot of attention they turned the fountain off she was so mad bout that she is 7 and yes some days she wants to b left alone like anyone does but trust me if she hated being on tv I would b the first to stop production period cause my kids r #1 so I hope this clears up some of the questions from that interview ..

What Dr. Drew stalker Charles Pearson claims happened to him