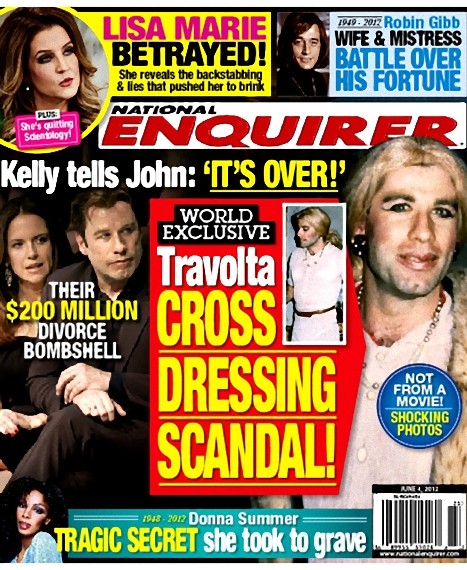 John Travolta is currently in the midst of denying allegations from what seems like hundreds of different male mas­seurs alleging the actor made inappropriate sexual advances towards them. As soon as Travolta gets one to drop a suit or withdraw his allegation, it seems like four more have already popped up! And the latest to surface, massage thera­pist Luis Gonzalez, tells the National Enquirer he was not only approached by Travolta, but he complied! (More on the sordid details in a moment)

And now, also thanks to the National Enquirer, we can add cross-dressing to the laundry list of alternate lifestyle activities the Scientologist is being accused of. The cover story on the June 4 issue coming out this week features the bold headline: 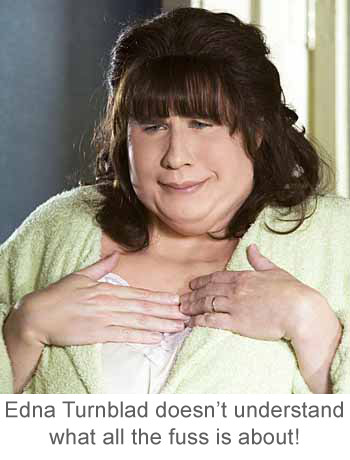 In the pictures, allegedly taken just prior to a party in Los Angeles in 1997, John Travolta can be seen wearing a blonde wig, white dress, brown belt, fur stole, earrings and a necklace. He’s also sporting a good bit of makeup, including thick black eyeliner and pink lipstick.

The magazine also claims that John Travolta’s wife of over twenty years, Kelly Preston, has left him in the aftermath of the cross-dressing scandal.

A “friend of the actress” tells the Enquirer: “Kelly told me their marriage is over and made it clear that she’s no longer living in the family home.

“She’s put up with John’s double life for decades while his behavior remained in the shadows.

“But all this coming out in public has humiliated her. Kelly is absolutely destroyed.”

BUT WAIT! The National Enquirer is breaking yet another John Travolta story today as they post the story of former massage therapist Luis Gonzalez, who not only alleges Travolta approached him for sex, but he complied! From NationalEquirer.com:

Former massage thera­pist Luis Gonzalez claims that he spent an afternoon having passionate sex with Travolta at the luxuri­ous Ritz-Carlton hotel in Laguna Niguel, Calif., in 1997.

“Travolta may not identify himself as a gay man, but it doesn’t dismiss the fact that he likes sex with men… and he’s experienced at it,” Luis contended. “I know because I had sex with him, and he loved it.”

Gonzalez claims he first massaged Travolta in 1988 and that he gave the Pulp Fiction star a rub down on numerous occasions after that without incident. In 1997, while working as a bell captain, Gonzalez was asked to go up to Travolta’s room to give him a massage because all the massage rooms were full. The “in-room massage” was frowned upon by the hotel, but they were willing to make exceptions for JT.

I’ll let Luis tell his own 50 Shades of Grey celebrity story from here: 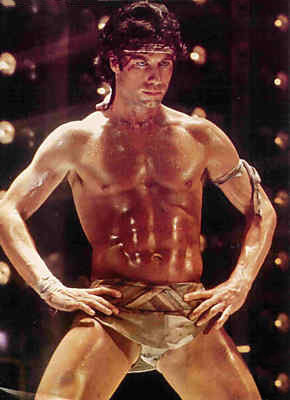 “It was about three in the afternoon. I set up the massage table by the door to the veranda… and he stripped down and got on the table.”

Luis says John insisted that it was too warm for him to use a top sheet to cover himself.

“That’s against Ritz-Carlton rules,” said Luis. “Everyone is supposed to be covered at all times…and the only parts of the body that were supposed to be exposed were the parts we were working on.

“But I gladly let him lay on the table naked…and within five minutes, Travolta spread his legs and I could see he had an erection.

“He moved around and started to breathe heavily. He’d say, ‘Oh, yeah, that feels so good! A little higher, please!’

“Travolta made all the signals that indicated he wanted something more than a massage. So I went for it.”

“He’s a great kisser,” said Luis, “and we wound up having sex.

“We got into the bed that was right next to the massage table and had a really good time.

“I can still remember it like it happened yesterday.”

Luis said that they engaged in oral sex and that Travolta appeared to be “very experienced.” Following their tryst, Luis says they showered together, cleaning one another, then got dressed. Amazingly, Travolta only gave Luis the cus­tomary 20 percent tip!

“I was in shock for about a week afterward, thinking, ‘I can’t believe it! I had sex with John Travolta!’” Luis admitted. “I was hoping to see him again after that, but I never did.”

Stay tuned – I’m sure there will be more to come! 😉