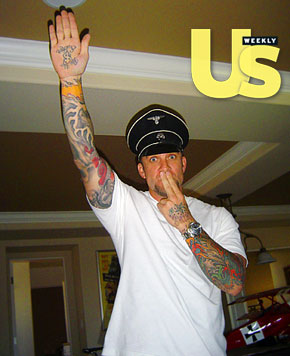 It appears that US Weekly was the highest bidder on the photo of Jesse James wearing a Waffen SS visor and giving the Hitler salute! Even worse for Jesse is the fact that he is mimicking Adolph Hitler’s mustache with two fingers on his left hand! TMZ first reported that there was a photo and that it was being shopped around a week ago.

If you look closely you will notice in the background there is a scale version of The Red Baron’s infamous Fokker Dr.1 triplane! I’m not sure what the poster is – anyone out there recognize it?

The picture should come as no surprise to starcasm.net readers because not only did I mention the photo was out there and for sale, but I also did a post about the use of Nazi insignia in the marketing of Jesse James’ custom motorcycle company West Coast Choppers. CLICK HERE to check that out!

Sandra Bullock’s stalker had an arsenal of weapons, including two machine guns