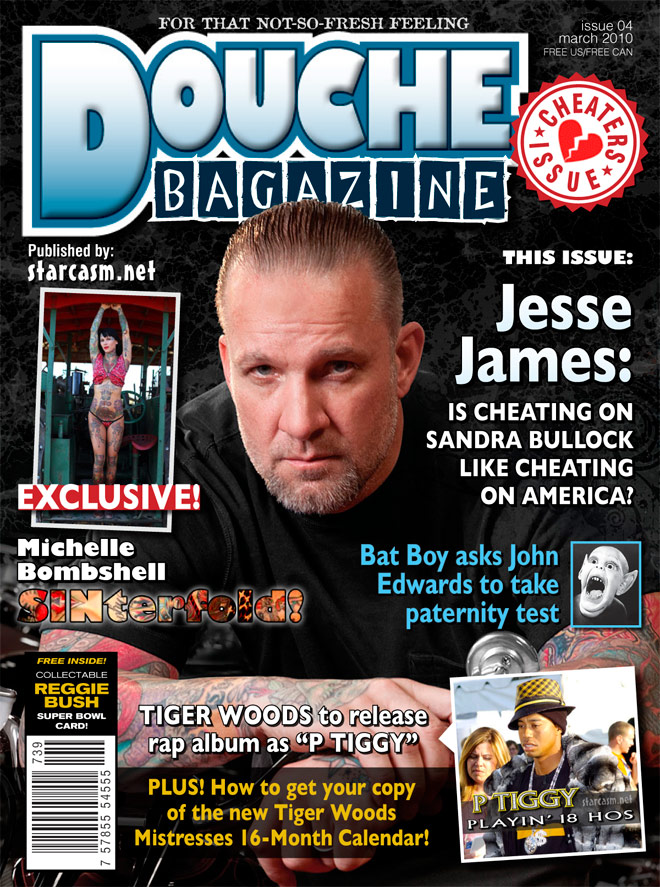 It’s been a while since we’ve been able to publish an issue of America’s favorite douchebag rag, but all the sleazy celebrity philandering going on demanded we fire up the presses for a special “Cheaters Edition” of Douche Bagazine!

If there’s one thing positive that can be said about most douchebags it’s that they are proud of what they are and have no qualms about flaunting their douchiness all in our faces – it’s actually one of their defining qualities.

But this special issue focuses on that sneaky breed of douchebag – the ones that can seem pretty cool on the surface, like dudes you don’t want to punch in the face. I’m talking about cheaters! But not just any cheater, the douchebag cheater!

The douchebag cheater likes to shove his fairy tail marriage (or serious” relationship) with a hard-to-find, unbelievably attractive and good-hearted woman down our throats while sneaking around behind her back and ours with easy-to-find (and otherwise just plain “easy”) waitresses, strippers, assistants and aspiring models. If Jesse James was bangin’ tattooed biker chicks left and right it wouldn’t have a negative impact on his image whatsoever! Actually, it’s quite the contrary – much like our male rock stars, we like our motorcycle building celebristuds to be virile! But, none of this applies if you go out and marry Sandra Bullock and constantly ramble on about your great family and start crying at awards shows!

Anyway, here’s what you can find inside the cover of the Douche Bagazine “Cheaters Issue:”

Has the entire country been cheated on by Jesse James? Sandra Bullock IS the all-American girl next door, and during the time that was supposed to be her finest hour, she finds out her husband is a douchebag and has been cheating on her with at least four other women! Keep up with all the latest on the Jesse James scandal HERE.

Is John Edwards the father of Bat Boy?!? If so, it will be another couple years before he admits it. Until then, read up on the offspring he has claimed and his controversial mistress, Rielle Hunter HERE.

Is Tiger Woods embracing his lavishly lustful lifestyle and becoming a rap star? Find out HERE.

Oh, and although he wasn’t married or possibly even in a real relationship, you can also catch up on the latest Reggie Bush and Kim Kardashian drama HERE.

Not enough douchebaggy goodness for you? Read up on our previous issues HERE.