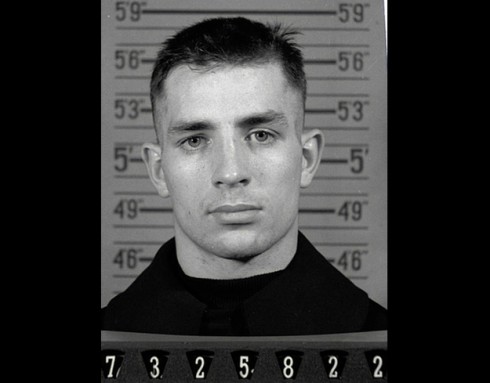 The Gothamist unearthed this mug shot photo of troubled but effervescent On the Road author Jack Kerouac from 1943 when he was only 21 years old.

The future author had dropped out of Columbia University and the Merchant Marines when he joined the U.S. National Reserve. He only stayed 10 days, barely enough time to take this enlistment mug shot, before he was transferred to the sick bay and then the psychiatric ward. After 67 days receiving psychiatric treatment, he was discharged.

Files released to the government in 2005 described why he was medically discharged. From The Gothamist:

“He was transferred from the Naval Training Station to the Naval Hospital in Newport because he had numerous headaches and ‘appeared to be restless, apathetic, seclusive. [And a] neuropsychiatric examination disclosed auditory hallucinations, ideas of reference and suicide, and a rambling, grandiose, philosophical manner.'” He was then diagnosed with dementia praecox, or schizophrenia, but Kerouac said this testing was a “folly” and a “farce.” He later told his mother: “as far as I’m concerned I am nervous; I get nervous in an emotional way but I’m not nervous enough to get a discharge.”

Kerouac, who died from cirrhosis at age 47, has been a hot subject in Hollywood lately. Kristen Stewart stared in an adaptation of his iconic work On the Road, and his (and other Beat Poets) involvement in the murder of David Kammerer is the subject of the upcoming movie Kill Your Darlings staring Daniel Radcliffe and Elizabeth Olsen.