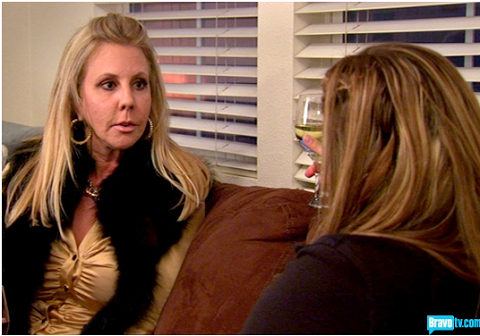 Vicki Gunvalson’s relationship with her daughter Briana has always been a bit of a power struggle. Vicki loves to be in control and sometimes is a bit too involved in Briana’s life. Upon hearing that Briana had ran off to Vegas and gotten married, Vicki kind of lost it. Their relationship became strained. Plus, Briana is extremely sceptical of Vicki’s relationship with boyfriend Brooks Ayers which has made it even more difficult for these two to get along.

“My anger and my disappointment at what Briana did almost destroyed our relationship,” Vicki told Star of Briana’s elopement. “We didn’t speak for two months. But time heals, and our relationship is stronger than ever.”

After filming wrapped on Real Housewives of Orange County‘s seventh season, tensions subsided. Briana and her mother put the past behind them and came together to plan Briana and Ryan Culberson’s formal ceremony which took place last month in Santa Barbara. “My mom has been amazing. It’s been really fun planning the wedding with her and just having her by my side,” Briana said at the time.

Vicki and Briana have one more thing to celebrate together — Briana is pregnant! Briana and Ryan will welcome their baby boy in just a few months! The O.G. of the O.C. is going to be a grandmother! What brings people closer than a baby?

Vicki and her boyfriend Brooks are still together and going strong — no word on if Briana’s relationship with him has gotten better, but we’re sure to find out during season 8 of Real Housewives of Orange County!