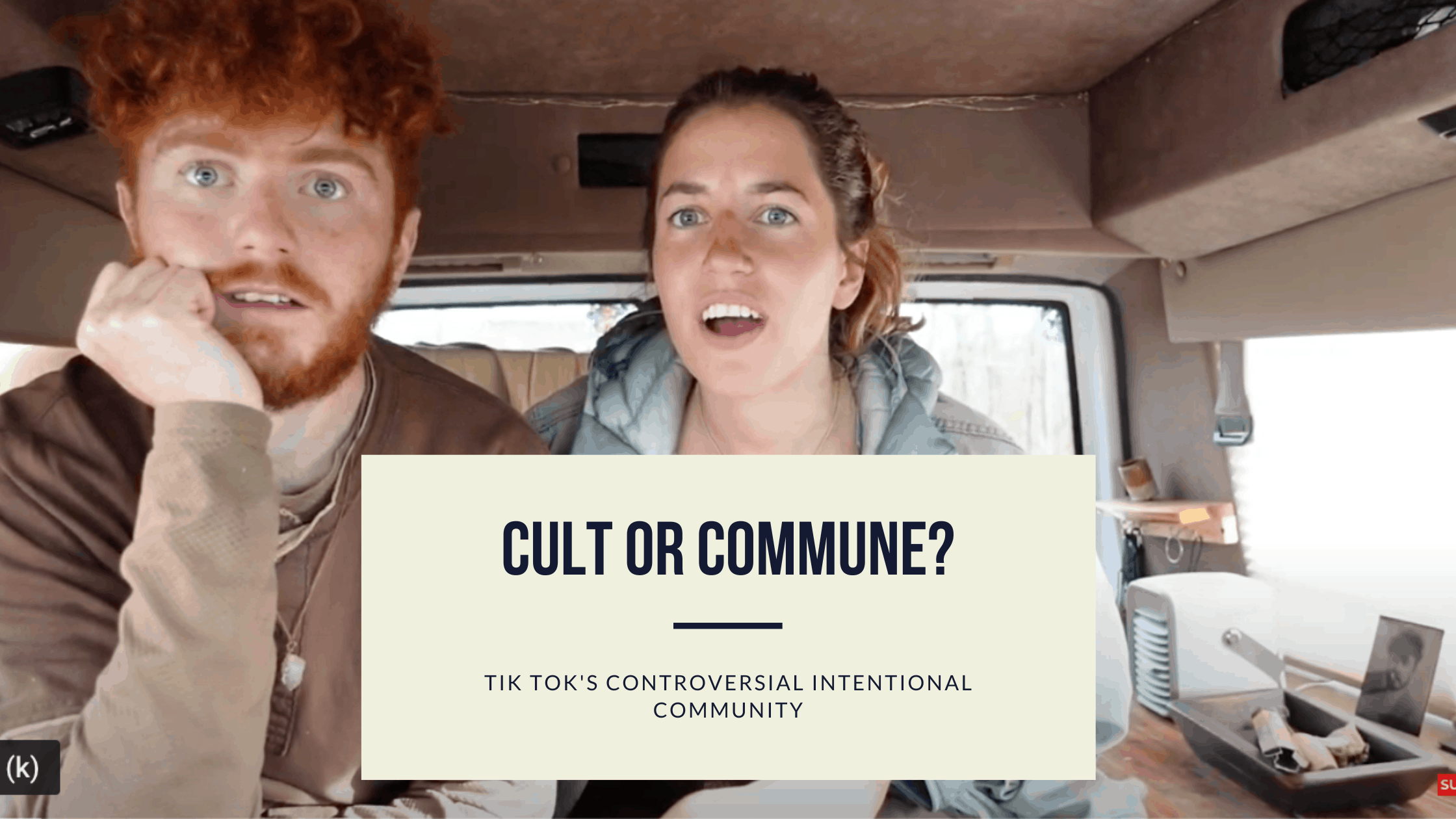 There have been a plethora of TikToks investigating and analyzing The Garden from the angle that they are a cult, and a number of YouTubers like ReadyToGlare have followed suit. Today YouTuber Cody Ko published a video, which inspired notable member TreeIsAlive (real name unknown) and his girlfriend Julia to full-on address some of the rumors and misinformation being spread about them in a video titled “The Truth… TreeIsAlive & Codyko.”

In the video, they tell their perspective, and even ask Cody Ko for an apology.

A huge part of what Tree and Julia wanted to make clear in their video is that, contrary to what Cody Ko states at the start of his video, Tree is not the leader of The Garden. The Garden claims to have no leaders, but even if it did, it would not be Tree as he only arrived at the Garden a few months ago and plans to move on to another intentional community soon.

People were under the mistaken belief that Tree was the leader because of how charismatic he was in his well-produced TikToks and livestreams. The energy he put out to market The Garden was very smooth and engaging, but it was almost too good as his polished enthusiasm in the TikToks inspired more suspicion than general interest in the project.

Another issue Tree wanted to speak out on was a strange video on his other YouTube account from 2018 titled “Margaret Knows, But Do You?”

In the video, Tree is shirtless and seems quite unhinged. He says that this was not genuinely footage of him, but an attempt at improv acting. He had hoped to garner attention with the video for his acting skills but ended up with a different kind of attention for his creepy performance.

Of course, Tree isn’t the only member of the group raising eyebrows. A more longer-term resident of The Garden, Rel Gumson (@rocknrelmusic,) has maybe leaned a little too far into trolling with her TikTok marketing efforts. Rel has made a number of TikToks with questionable vibes, but two that stand out are ones she made passing around a jug of homemade blueberry wine that’s marked “Kool Aid.”

In both videos, people pretend to have seizures or joke about dying after drinking from the jug, which makes it clear they are satirizing the 1978 events of the Jonestown massacre. During that tragic event, a total of 918 adults and children followers of cult leader Jim Jones lost their lives when they either obeyed his directive to drink a cyanide-laced Flavor-Aid drink, or were forced to do so. 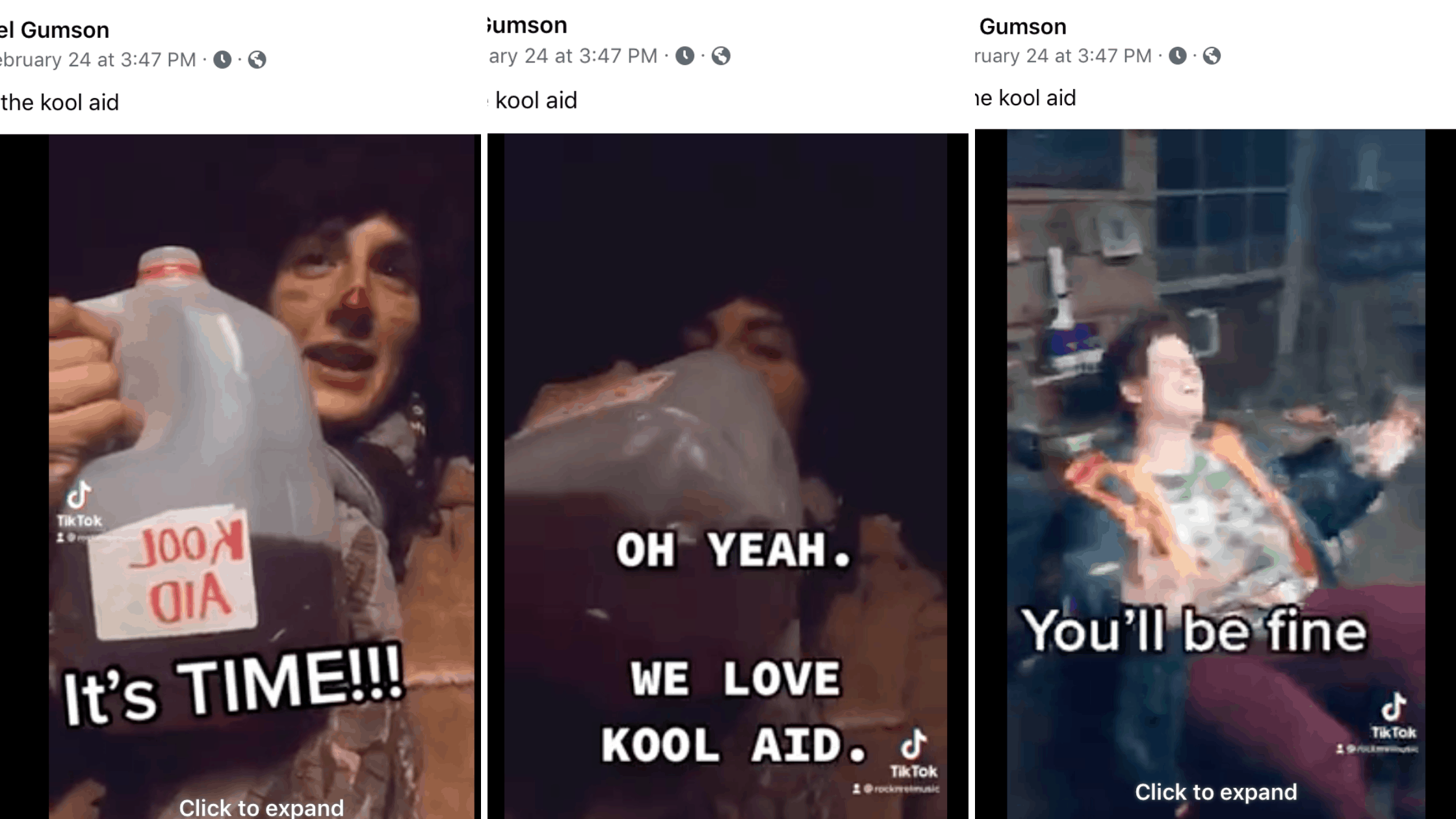 These videos further fueled fears that there may be something sinister happening at The Garden. Rel claims that she didn’t even know who Jim Jones was, but was instead referencing Tom Wolfe’s 1968 book The Electric Kool-Aid Acid Test, which chronicled Ken Kesey’s “band of band of Merry Pranksters” who traveled around the U.S. in the 1960s experimenting with LSD and the idea of achieving some kind of spiritual transcendence.

She has also made multiple videos claiming that The Garden is “not a cult,” and in one she beckons viewers to “Just come, it’s fine,” which gives off an eerie, propaganda-like vibe that inspires the opposite of trust in the viewer.

Rel has also raised eyebrows when she revealed that she made a skirt out of her dead dog, who was killed by a car several years ago. She also made a dead cat into a hat, and recently published a video showing her eating a roadkill raccoon, then skinning it to use its coat for later.

The Garden was founded over a decade ago by a group of individuals who wanted to practice living sustainably. In a May 2020, interview with one of the group’s founders and one of the three owners of the land, Patrick, it’s made clear that the main goal of the Garden is to be an educational hub, which is not necessarily a long-term livable situation for most people because of the amount of foot traffic they want.

A major issue people have with The Garden is the fact that they don’t do background checks on who they invite to live with them. One of the members, Kornbread (also goes by Cornbread) has a violent criminal record. He currently has a court date in May for “domestic assault and disorderly conduct.”

In their explanation video Tree and Julia say that they’ve been traveling to different intentional communities for several years now. When they arrived at The Garden they found that it was the first one that openly encouraged them to promote their way of life on social media, so “they got excited.” However, they never expected the amount of virality and negativity they’ve received.

Tree points out that The Garden is an educational community that’s trying to spread the message of sustainability.

“Neither of us has ever eaten a cat,” Julia makes clear. This is a reference to a past event that happened with The Garden before Tree and Julia were there. The story is that there was a cat who was killing and maiming their chickens, so the group voted to kill the cat. After they killed the cat several of the group, including Rel, ate the cat, and then Rel turned the cat into a hat.

“Please think before you start attacking us because it’s getting really intense and it’s a lot to handle and we are human beings, and I think we’re pretty nice people, and you’re being mean,” Julia says. “Thanks to all the people who have reached out and tried to support us this time.”

“The message that I, and I think we, are trying to spread are that we need to be living more sustainable. And that’s what’s we’re doing here, and that’s the message that we’re trying to show,” Tree explains. “That’s why we were making TikToks telling people to come here is because we do think that climate change is going to affect this world. Our planet is being exploited and we need to act now, and to counter that exploitation.”

“We’re already seeing the effects of climate change in a mass way,” Julia adds. “And I think a lot of people know this, and personally I just don’t think there’s enough time for us to keep being consumers and contributing to the infrastructure that’s destroying the Earth. And that’s why we’re here: trying to create alternative infrastructure that won’t destroy the Earth. And I also don’t there’s enough time for us to just do it, I think that a lot of people have to start doing it. So we were trying to spread that message as far and wide as possible and it got so flipped around on us and we’re hoping that the truth can still shine through.”

Whether or not The Garden is a “cult” maybe be a bit subjective. For one thing, it’s hard to define exactly what a cult is. One way of doing so is to consult Steven Hassan’s BITE model of Authoritarian Control.

What does seem true is that marketing and theatrics trying to promote The Garden as a blueprint for sustainable living quickly turned into a far different narrative.

Update: Cody Ko has privated his video about The Garden.