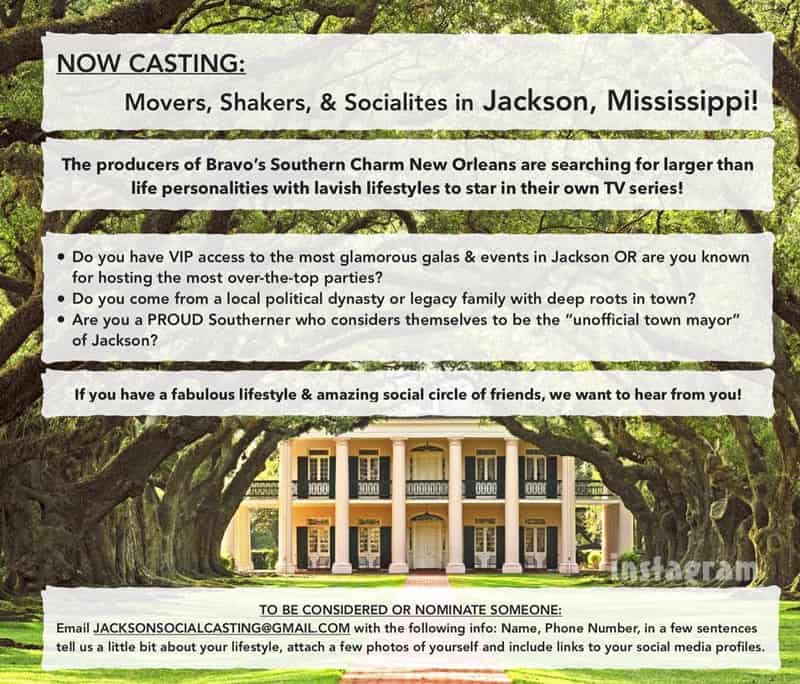 It looks like Bravo might be considering expanding their Southern Charm franchise inland! According to a new casting call, Southern Charm: New Orleans producers are looking for “movers, shakers, & socialites in Jackson, Mississippi” to “star in their own TV series!”

That’s A Wrap Acting Studio in Hattiesburg, Mississippi shared the casting call above on Friday, and it was then shared by @buffyasummers0717_ on Instagram. Here’s the text from the image:

The producers of Bravo’s Southern Charm New Orleans are searching for larger than life personalities with lavish lifestyles to star in their own TV series!

• Do you have VIP access to the most glamorous galas & events in Jackson OR are you known for hosting the most over-the-top parties?

• Do you come from a local political dynasty or legacy family with deep roots in town?

• Are you a PROUD Southerner who considers themselves to be the “unofficial town mayor” of Jackson?

If you have a fabulous lifestyle & amazing social circle of friends, we want to hear from you!

TO BE CONSIDERED OR NOMINATE SOMEONE: Email JACKSONSOCIALCASTING@GMAIL.COM with the following info: Name, Phone Number, in a few sentences tell us a little bit about your lifestyle, attach a few photos of yourself and include links to your social media profiles.

I should point out that the casting call does not mention that the show will be part of the Southern Charm franchise. But, that is almost always how the initial casting calls are handled. Not only does it help keep the show under the radar a bit, but it also gives producers the flexibility to alter the title and concept if it isn’t a perfect fit for the existing brand. Bravo did something very similar with their rumored Real Housewives of San Antonio project, which would eventually become Texicanas instead.

Comments on the Jackson casting call on various forums and social media platforms all seem a bit surprised by the city choice, especially given the numerous larger and more well known Southern cities such as Atlanta and Nashville. Of course, it could be that they have issued multiple casting calls in various cities around the South, and Jackson is the only one we know of so far.

The initial Southern Charm series was based in Charleston, South Carolina. Bravo would later add two additions to the franchise in Savannah, Georgia and New Orleans, Louisiana.

So what do you think? Would you tune in to check out a show featuring “movers, shakers, & socialites in Jackson, Mississippi?” While you mull over your answer, here’s a little inspirational music courtesy of Johnny and June Carter Cash:

Are Thomas Ravenel and Kathryn Dennis still together?