Melissa McCarthy and her director husband Ben Falcone are attempting to take over July 4th weekend with the help of Susan Sarandon with their road trip comedy Tammy. Ben worked with Melissa before in her breakout role in Bridesmaids and again in The Heat. Does the couple like working together? How did they meet?

Melissa actually went to college in Ben’s hometown, Carbondale, Illinois back when she was going through her goth phase. The pair officially met ten years later in 1998 at The Groundlings, an Los Angeles improv school, and have pretty much been inseparable ever since. “We immediately were improvising with each other and immediately gravitating toward each other, writing-wise,” Melissa said of their Groundlings days. “The first day, everybody’s doing their biggest, probably most unrealistic, poorly done characters. And Ben got up there and did this very strange inmate that sat on a chair quietly. I just thought it was the funniest thing. I thought: I like that creepy guy.” 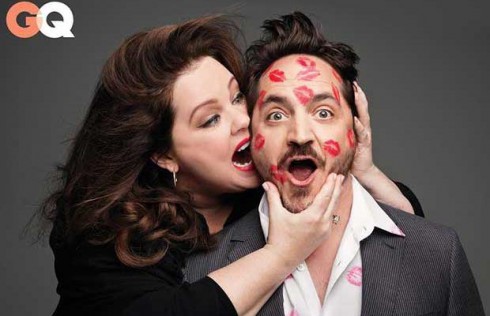 After dating for a while, they married October 8, 2005. Their first daughter Vivian was born May 5, 2007, and Melissa had second daughter Georgette (Georgie,) March 2010. Since then she’s been catapulted from a pretty successful actress to a comedic superstar.

They’ve used Melissa’s meteoric rise to find more opportunities to work together, an idea that could make some married couples squirm. “Movies require traveling and long hours so these were hours we were able to spend together,” Ben has said about working with his wife. “It actually created more time for us to spend together.”

Melissa has called her marriage to Ben “easy,” and praised his bedtime princess storytelling skills. Instead of going with the same old princess gets saved by handsome prince storyline every night, he comes up with fun adventures and businesses for the princesses to do. She told EW that she’s hear Ben tell their daughter Vivian “When Jasmine opened her new orthodontist’s office the prince came in with terrible teeth and she saved him.’ And the next night he’ll be like ‘Jasmine opened up a wild zoo!’ and I hear Viv like ‘No, no, no, the Prince did it!’ And he’s like ‘No he didn’t, no he didn’t. He worked for Jasmine for the next 17 years of his life.’”

Sister Wives: Are Meri and Kody Brown still together?