The much-anticipated Heath Ledger directed music video for “King Rat” by Modest Mouse was released Tuesday, August 4, 2009. Here’s the background on the project from the folks over at wearethemasses.com: 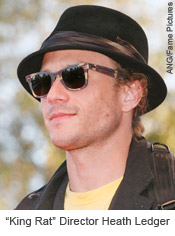 In January of 2007, while visiting his homeland of Australia, Heath Ledger presented Isaac Brock of Modest Mouse with an idea to direct a video for their yet-to-be-released song “King Rat”. Heath’s vision, brave and unapologetic in its nature, would marry his love of bold and original music with his impassioned stance against the illegal commercial whale hunts taking place off the coast of Australia each year…

…The video was fully conceived down to the last detail but unfinished when Heath passed away in January of 2008. We completed the video in his honor with the support and advocacy of Isaac Brock.

The sound is straight-forward Modest Mouse, kicking off with a great Tom Waitsian “Get Behind the Mule” banjo and crow-like horn blast before settling into a tug of war between Isaac Brock’s vocals and ecstatic nasty dirty instrumental breaks reminiscent of Springsteen’s upbeat Seeger Session numbers. In the end, the tug of war ends with both sides collapsing into the muddy middle in a joyfully pessimistic mish-mash of melodic noise that somehow doesn’t come off as too much. Good ol’ Modest Mouse!

Some of their songs force an unwanted exhalation of
“meh” from my mouth, but when it’s not “meh” it’s
pure-dee “woo hoo!” I still remember the first time I
“heard” the Modest Mouse – it was the great song
“Paper Thin Walls” from their 2000 album The Moon
& Antarctica

. Awesome stuff! That song is still on my
iPod short list! Unless for some reason I’m in a
bummed mood and don’t want to dance around
pumping my fists…

I digress! The video is seriously dark, but also a lot of
fun. It’s in that wonderfully crude style of animation
that looks like someone did a series of 80 drawings
and then just sort of filled in the gaps between. I was
gonna just post the video, but because it seemed to
lend itself to it, I decided to break it down into stills. So have fun hopping back and forth between all the “Darkter” Suess illustrations! (Don’t worry! The video is coming! Just a little further…)

Oh, and if you’re gonna download the video from iTunes, do it sooner rather than later.Why? I’ll let wearethemasses.com tell you:

Always one to operate from his heart and take a stand for what he cared deeply about, Heath’s intention was to raise awareness on modern whaling practices through a potent visual piece without having to say a word. It was his way to let the story, in its candid reversal, speak for itself…

…Proceeds from iTunes video downloads in the first month of release will go toward Sea Shepherd Conservation Society, an international non-profit, marine wildlife conservation organization committed to ending the destruction of habitat and slaughter of wildlife in the world’s oceans in order to conserve and protect ecosystems and species. Sea Shepherd uses direct-action tactics to investigate, document, and take action when necessary to expose and confront illegal activities on the high seas. We encourage you to visit their site if you are compelled to make a larger donation or volunteer your time. http://www.seashepherd.org

The “King Rat” video was directed by Heath Ledger, co-directed and illustrated by Daniel Auber with lead animation by Norris Houk, animation by Jade Taglioli and produced by Sara Cline of THE MASSES.

THE MASSES and Modest Mouse are proud to present “King Rat”. We hope Heath’s work inspires you in the same way his passion and bravery inspired us.

And here are the stills. Click the thumbnails to zoom in. (There are a total of 71 images on 4 pages, so be sure to scroll through and not miss the rest! Also, I tossed in “Paper Thin Walls” and the lyrics to “King Rat” at the end of page 4)