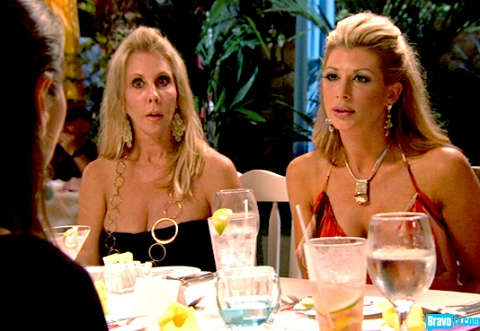 Alexis Bellino has been all the talk lately after the ‘phony intervention’ in Costa Rica on Real Housewives of Orange County. She has taken on a different role this season and at times, it seems as if everyone is against her. She has admitted it hasn’t been the easiest year for her, so will she back for more?

In a new interview with Radar Online, Alexis is opening up about everything that has happened on the show and her thoughts on returning.

“I feel they were the mean girls from high school all season, I feel like it started in the first episode,” Alexis admits of her RHOC co-stars. Although each of thewomen had something negative to say to her at some point during the season, Alexis believes that Tamra was the ringleader. “It was mostly her doing the smack talking and she kind of lured Heather (Dubrow) and Gretchen (Rossi) into the mix, which is unfortunate.” Alexis had never been close with Heather, but her and Gretchen were extremely close in previous seasons.

Even though she’s been through a lot, she is staying positive. “I am hopeful that things will change next year — if there is a next year… if I do a next year. There’s so many ‘ifs’ in the question.” Her husband, Jim Bellino, announced in a recent blog that he would not be returning to the show. In fact, fans will only see him one more time this season.

Jim has always been vocal about not liking the rest of the women on the show. He even has had some harsh words for Bravo about the way they portray his wife. However, he and Alexis have become close with Vicki Gunvalson and her boyfriend, Brooks Ayers. Perhaps that is the motivation they both need to return to the show.

Of her new, unexpected friendship with Vicki, Alexis explains, “I am definitely close to Vicki, and that’s not a façade. We’re trying to protect ourselves and make sure it’s a sincere friendship and not staged. Hollywood makes everything a little bit of a façade.”

Fans of the show surely didn’t see this friendship coming — nor did they see Gretchen and Tamra every being friends. Real Housewives of Orange Countyseason 7 is full of surprises! What will happen next? Find out every Tuesday night at 9/8c on Bravo!

Did Jim Bellino get a chin implant? Before and after photos