Swimmies-lipped Lisa Rinna has all but confirmed that she will be returning to the pages of Playboy, according to comments she made to Extra. “I’m the worst liar on the planet; I can’t lie, so…I think that could be a yes,” she stated. The Melrose Place and Dancing with the Stars alum is no stranger to Hef Illustrated, appearing in 1998 (see photo above) while still pregnant with soon-to-be daughter Delilah Belle. 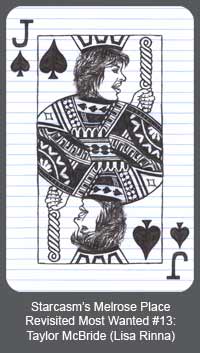 We love it when a former Melrose Place star makes some news (even if it is as insignificant as appearing in Playboy) because that means we get to unveil another card in the Melrose Place Revisited Most Wanted Deck! In the tradition of the Most Wanted Iraqi playing cards, we’ve created our own deck for who (or what) we want to come back to Melrose Place for the upcoming CW remake of the series. We start with the ace of spades (the most wanted) down through the two of diamonds (least wanted). So far all we have is the ace of spades (Amanda/Heather Locklear) and the King of Clubs (Jake/Grant Show), and now we can add the Jack of Spades, which according to our suit rankings, places Lisa Rinna at 13th on the list!

Rinna came late to the show and though we liked her character Taylor McBride, she only got to interact with the Melrosian elite for a single year before they starting jumping ship in the sixth season. By that time everybody had slept with everybody else and everything had been blown up at least once, so it was just a little too easy to blame our boredom on the new cast members. (“He is leaving her because she pushed his mom out the window when his mom caught her in bed with his dad? Bleh. Seen it!”) Rinna does get some starcasm kudos for being the first to mention the rumored CW project back in September and for her enthusiastic “I would do it in a heartbeat” statement to E! We like your spirit Lisa! We look forward to your return as Taylor and also whatever character they come up with for your lips to play.