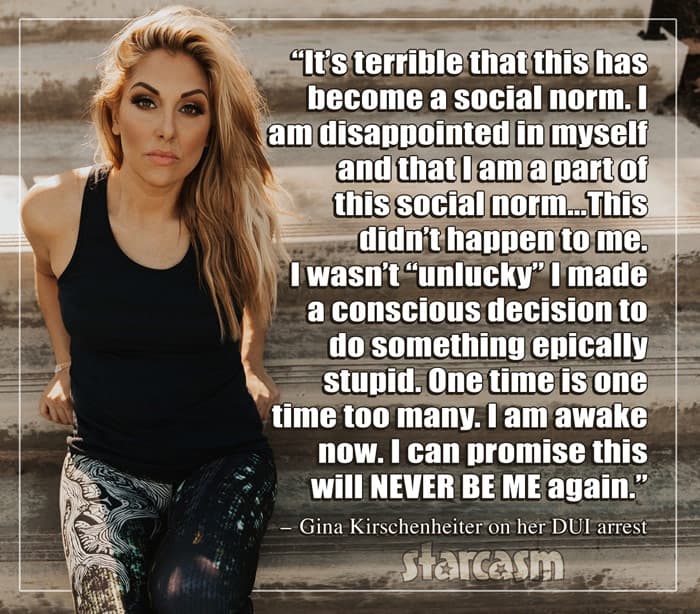 The Real Housewives of Orange County‘s Gina Kirschenheiter was charged with a DUI early in the AM hours on Friday after being pulled over in in Rancho Santa Margarita, California for a traffic violation. The 34-year-old reality star issued an apology in a statement soon after the story broke, but she took to Instagram today to issue a lengthier statement taking full ownership of her “bad choices” and promising “this will NEVER BE ME again.”

I made a very bad choice the other night after a mom’s night out. I am extremely disappointed in myself and regret my actions wholeheartedly. I have learned a valuable lesson and hope to show you all that this one incident does not define me.

Over the weekend, Gina was inundated with comments ranging from “it could have happened to anyone” and “we’ve all been there” to somewhat less forgiving stories from those who have lost friends and family to drunk drivers. None of the comments fell on deaf ears for Gina, and her statement seems to be the product of genuine self reflection, humility, and regret as she flatly dismissed the “social norm” of getting a DUI before assuring those who have suffered due to drunk drivers that she is “committed to this cause and hope to effect a positive change and dialogue.”

The statement, which was accompanied by a text graphic that reads “THE BEST APOLOGY IS CHANGED BEHAVIOR,” has been extremely well received by the public. It certainly comes across as sincere, and doesn’t seem to be watered down by her PR people or her lawyer.

I honestly believe that some issues no matter how great and important are truly only a part of our awareness once we are personally effected by them. For me….what happened this week is that issue.

It’s amazing how in the course of less than a week you can realize the full extent of allowing people into your every day life and how the opinions of everyone watching can run from incredibly chastising to extremely supportive.

Bad choices have bad consequences. Mine are magnified bc I chose to share my life with you on a very public stage. Those who are a part of my real life gave me words of encouragement and love knowing the content of my character and the love in my heart. As embarrassed and hard on myself as I’ve been in these past few days, I’ve been shocked by the astonishing amount of “it could have happened to anyone” and “we’ve all been there” that I’ve received through friends both close to me and on social media.

I could easily join in with the chorus saying “you’re right, it could be any of us” but it shouldn’t be any of us. EVER!

It’s terrible that this has become a social norm. I am disappointed in myself and that I am a part of this social norm. Especially since everyone who knows me knows I’m the queen of Uber/Lyft. This didn’t happen to me. I wasn’t “unlucky” I made a conscious decision to do something epically stupid. One time is one time too many. I am awake now. I can promise this will NEVER BE ME again.

To all of you who wrote me with pain in their hearts about how drinking and driving has had a negative impact on them and their families, I hear you. Thank you. I make this promise to each one of you with your messages in my heart…. I am committed to this cause and hope to effect a positive change and dialogue. You don’t have to believe me with these words, but I hope over time you will see through my actions.

Gina is currently going through a divorce from her husband Matt Kirschenheiter, with whom she shares three children: Nicholas (6), Sienna (4) and Luca (3). Gina’s next scheduled court date for the DUI is February 28.