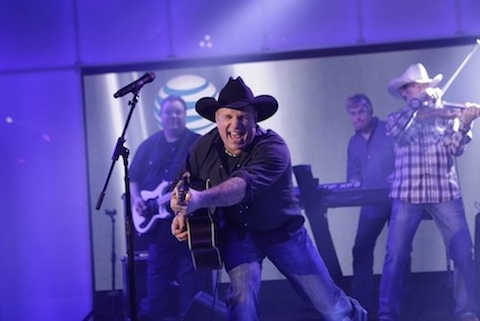 Country-pop icon Garth Brooks–whose first name is Troyal, and who has been known to check into hotels as “G. B. Rooks”–is going to make an “unprecedented” appearance on the Today Show on Thursday, the 8th of January, 2015. Exactly what “unprecedented” means has yet to be announced. But we do have one tiny, important detail: G-Bro will be countrying it up for all four hours of the program. That’s right: You can wake up to Mr. Brooksington with your morning coffee, starting at 7 AM Eastern Standard Time.

Mr. B is the first guest in the entire 62-year history of TDS to spend the whole four hours with cast and crew. He hasn’t announced whether or not he’ll dust off the ‘ole Chris Gaines soul patch for a #tbt third hour of the show, but, if there was ever a time to whip up some #FreeChrisGaines signs and haul ash down to Rockefeller Center, now is that time. Brooksie-poo has had a slew of hits during his decades-long career, true; still, it’s safe to expect something strange from the entertainer during this morning-long stint. If he wants it to be wonderful, too, he best bring back Chris.

TGB’s latest single, “Mom,” is tearing up the charts, and lighting social media up like an arena rock light show. The tour for Man Against Machine, the latest album from the ticket-selling genius, is ongoing. It hits Tulsa OK this week before continuing to spread across the land.

And, if you’re not a big Troyal fan, now you know which channels to avoid on Thursday morning. You’re welcome.