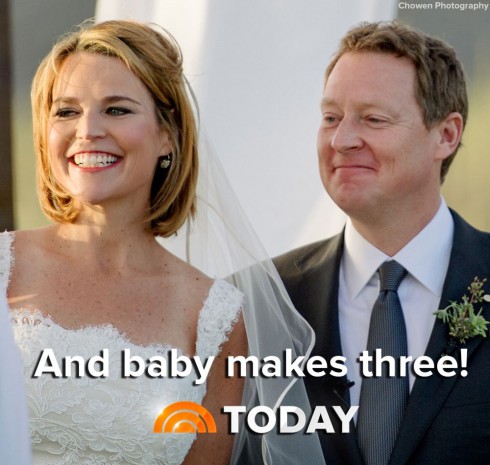 Today‘s Savannah Guthrie had an eventful weekend: The co-anchor married Mike Feldman near her Arizona hometown on Saturday. Then, during the reception, Savannah announced she’s four-months pregnant with her first child.

Instead of taking an immediate honeymoon, 42-year-old Savannah returned to the news desk to publicly share the news. She said she’s “excited, overjoyed and blessed.”

Savannah and Mike, a political consultant, got engaged in May 2013. Savannah said preparations were well underway by the time they discovered they are expecting.

“It’s funny, ’cause we set the wedding date, I bought my dress, and then I found out,” she said during the Monday show. “So I’ve been doing a little praying that I would fit in it, and it all worked out.”

Explaining the baby is due in “late summer,” Savannah said she’s relieved to finally share the news.

“I feel great, and actually I’m so happy to tell the world,” she said. “Because I can’t suck in this gut any more.”