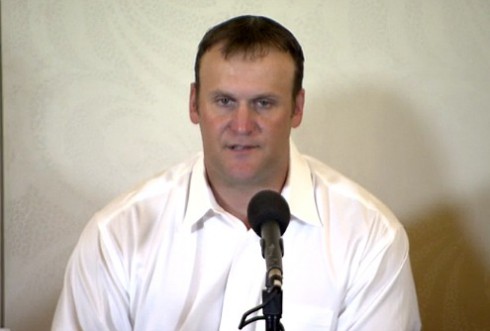 How about some amazing news out of Florida to mix things up? Former Miami Dolphins fullback Rob Konrad, 38, is alive after falling off his small fishing boat last Wednesday. Knowing hypothermia or cramping would likely set in within a few hours, Rob used the sun to figure out which way was west and began swimming for the shore. Sixteen hours later, he crawled onto solid ground in Palm Beach.

“After some time I just said, ‘Look, I’m not dying tonight and I’m going to make it to shore,'” Rob said during a press conference on Monday. “I ended up in a boater’s nightmare. And I was lucky enough to survive.”

During the press conference, Rob filled in some holes from the U.S. Coast Guard’s original report: He was fishing when a sudden wave knocked him overboard. In moments, his boat — which was on autopilot — was too far away. Without a life-vest or flares, Rob knew he couldn’t just wade and hope he would be found.

“I realized I was in some real trouble,” he recalled.

So he started swimming, even as sharks circled and jellyfish stung him. He said the bigger mental challenges were when he couldn’t get the attention of a nearby fishing boat or a Coast Guard helicopter flying above. Still, he said he stayed motivated by thinking about his wife and two young daughters. Eventually, he saw lights on the shore and then heard the waves crashing at the beach.

“The problem was I couldn’t walk. My body was shaking uncontrollably. I crawled up on the beach and warmed myself up enough to be able to walk,” Rob said. Then he walked to a nearby house and was able to get medical help. He was taken to a hospital and treated for dehydration and hypothermia.

At the press conference four days after the event, Rob and his wife admitted the details of the story were hard to believe. Wife Tammy said she thinks about it another way: “It was a miracle he made it home.”