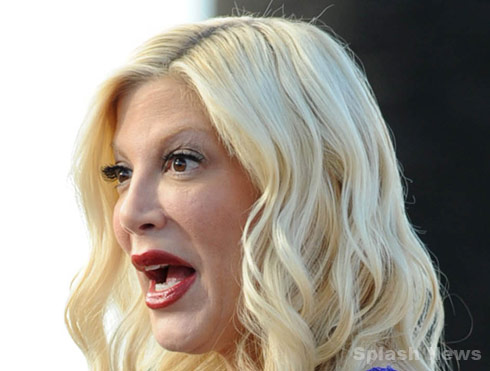 In Tori Spelling’s recent memoir Spelling It Like It Is the actress and daughter of TV mogul Aaron Spelling revealed how her family had fallen on difficult times financially and that she was having to relearn a more cost-efficient way of living.

The mother-of-four even told People that she and husband Dean McDermott decided not to proceed with a vasectomy because their business manager told them they couldn’t afford it. She added, “I haven’t bought a purse in three years, and it’s fine. I look back at that girl who shopped at Gucci in my 20s, and I can’t even relate. I can’t believe I thought it was important.”

Apparently her new frugality doesn’t extend to the help as Radar is reporting that she currently employs 3 nannies to take care of her 4 kids; Liam, 6, Stella, 5, Hattie, 2, and Finn, 1!

Tori acknowledged that growing up spoiled gave her a false since of entitlement:

“It’s no mystery why I have money problems… I grew up rich beyond anyone’s dreams. I never knew anything else. Even when I try to embrace a simpler lifestyle I can’t seem to let go of my expensive tastes… And then there’s my shopping problem. I’ve bought ridiculous amounts of stuff for the kids, clothing, toys, crafts.”

“Tori has multiple storage units stuffed with furniture, clothing, accessories … over 20,000 square feet. It’s all very well-organized but she refuses to part with any of it. She could raise hundreds of thousands of dollars if she were to sell just some of it.”

One might understand after her run of bad luck in regards to losing out to her mom on most of her dad’s fortune, selling her home for a big loss, closing her store and having her Oxygen show dropped, how the actress used to extravagant wealth might need to make changes and not necessarily changes that the average person can relate to. But, to publicly state that you were told you couldn’t even afford a vasectomy yet still employ 3 nannies — that’s a hard sell…