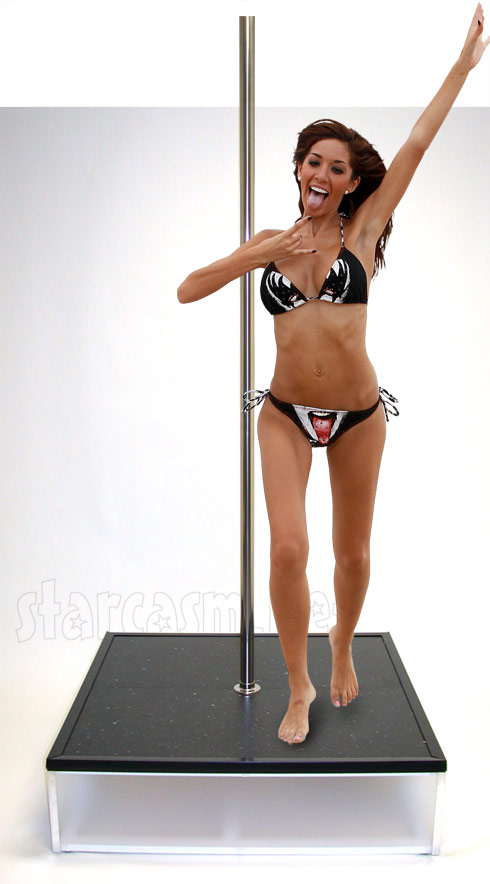 Former Teen Mom star Farrah Abraham continues to add to her Farrahmazing resume with her latest entry being a paid adult dancer in Texas!

According to a source for E! News, Farrah has started stripping at Palazio Gentlemen’s Club in Austin. “She was hired a couple of weeks ago as a cocktail waitress but wanted to make more money dancing, so they moved her up to the stage,” says the source. She was definitely not shy and looked like she knew what she was doing,” the source added, which could be due in part to Farrah’s pole-dancing lessons:

The report was pretty much confirmed (sans typo) prior to E! News’ report by Twitter user @DP_BCW who tweeted on Sunday:

So sarah from teen mom strip at palazio

But, as is often the case with Farrah, nothing it as simple as it appears on the surface, or at least it isn’t if you ask Farrah herself — which E! News did.

“A friend of mine works there and I’m researching,” Farrah explains. “I’ve been trying out all the roles that make up a gentleman’s club, including cocktailing and dancing. There’s management and there’s cooking too. It’s job shadowing that I hope pays off.”

Farrah then draws an unlikely comparison between her and actress Jennifer Aniston, who famously showed off her stripper moves in the film We Are the Millers. “In the same way Jennifer Aniston researched her role as a stripper, that’s what I’m doing,” Farrah explains. “It’s how I get the information to write my books and do my movies. Unfortunately, I’m not free to talk about what those future projects may be. But I’m interested in hearing all the women’s stories. And while I’m doing it, I’m getting paid. I’m getting paid to play a role and get informed.”

I’m a little embarrassed to admit I’m one of the world’s leading Farrah Abrahamologists, and I’m going to go out on a limb and speculate that Farrah is planning on opening a night club — expanding her brick-and-mortar empire from just frozen yogurt.

If that’s the case, then Farrah appears to be doing lots of research in Austin of late. Here are a couple photos of her hanging out at Rio Dayclub and Nightclub in Austin:

I actually live in Austin, so of course I’m debating checking this out for myself. I guess it would be one of those rare times I could legitimately write off a strip club visit!