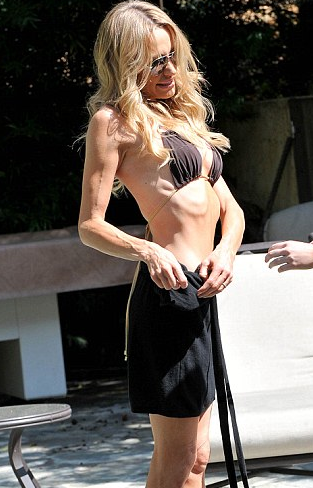 It’s no secret that this season of Real Housewives of Beverly Hills delves deep into the personal troubles of Taylor Armstrong and her now deceased husband Russell. The other wives, who were already a bit alarmed about Taylor, really started to get worried when she had an alcohol (and lack of food) induced mini-breakdown on a trip to Colorado. They noted that not only was she in a lot of emotional distress and drunk, but she looked shockingly thin.

On last week’s episode, (Season 2, Episode 3) Taylor visited Kyle’s house upset about an article in the press about her marriage. It also claimed she wasn’t eating. She told Kyle she didn’t know how any of this personal info leaked because “everyone in her life is under a confidentiality agreement.” She said on camera that she suspected Lisa Vanderpump of leaking the story, and then Lisa confronted her about not eating. “You’ve dropped a hell of a lot of weight . . . we need to talk about that. You’re stressed most of the time.” Lisa continued “You know we haven’t always been best friends, you know that right? But I’m seriously concerned about you.”

Lisa then told Taylor that she can come over to her house to deal with her issues (In interview Lisa quipped “Get your skinny ass over to my house, and let’s sort yourself out. End of story.”), an offer Taylor found weird after Lisa just told her they weren’t good friends.

During tonight’s episode, Lisa discusses Taylor’s weight some more with Kyle Richards, who seems to admit that Taylor might be too thin, but compares her inability to make Taylor eat to dealing with someone who has a drug problem.

“You can’t force someone to eat. That’s like saying a drug addict, if you were their friend you’d make them stop taking drugs. That’s impossible!”

In May Taylor denied reports that she had an eating disorder, but admitted that she had lost a great amount of weight because she went “too far” with herbal diet supplements her husband Russell brought home as part of a potential business deal.

Taylor talked to OK! about the controversy over her weight, saying “I do want to tell OK! exactly what did happened. I decided I needed to drop a few pounds, but I went to unhealthy extremes.” She was upset about her clothes fitting too tight, and being stressed out, so she said she tried the herbal supplements behind Russell’s back. “I started taking the supplements without him knowing. In the back of my mind I didn’t think they would even work, so I wasn’t worried — they were all natural and I thought you had to take prescription drugs to really ever lose weight.”

What do you think? Did Taylor get too thin?

Brandi Glanville says Eddie Cibrian gave her HPV, claimed he got it from a lollipop