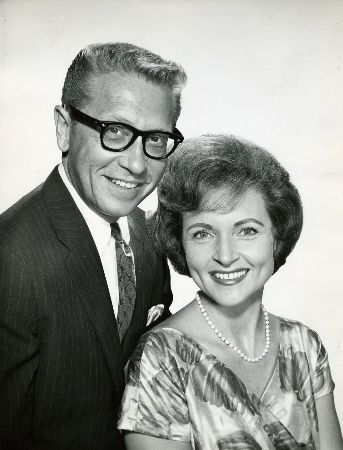 It seems like every week there’s some new celebrity with a rumored sex tape. Just last week saw the release of The Real Housewives of New Jersey controversial cast member Danielle Staub’s naughty home movie, and just before that was Kendra Wilkinson. The “new” celebrity this time around isn’t new at all, it’s 88-year old American sweetheart and Golden Girl Betty White!

The initial rumors of a sex tape have now shifted to the possible existence of four photographs featuring Betty White and her late husband Allen Ludden that are currently being shopped around. The photos were allegedly discovered in a home where White had previously lived and were found in a box left behind by the actress.

The photos have created quite a buzz, even getting mention on Radar Online, meriting a response from Betty White’s agent, who denies that the photos are of his client:

“This is simply not her… This has come up over the years. People claim they have photos of Betty and Allen, and it’s simply not true. And Betty’s laughing. She can’t believe people are still talking about this. Maybe there’s some other stuff [they found] of Betty’s… Maybe they found her old jewelery.”

You can see Betty (with her clothes on) alongside Jane Leeves, Wendie Malick and Valerie Bertinelli in the new sitcom Hot in Cleveland Wednesday nights at 10/9 c on TV Land!