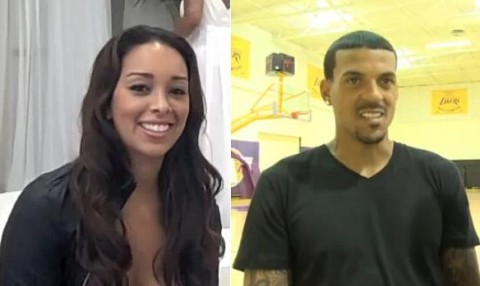 Los Angeles Laker guard Matt Barnes was arrested on suspicion of domestic violence in Sacramento, California last night.  A spokesman for the Sacramento County Sheriff said that Barnes was taken into custody after an incomplete 911 call at approximately 4:16 PM.

The deputies found Barnes and a woman “who lived with him and with whom he had a dating relationship” and a scene that displayed physical evidence of a confrontation in which Barnes was deemed the aggressor.  In addition, Barnes was believed to be preventing the woman from speaking with 911 call operators.

Barnes was been released on $50,000 bond and will be arraigned on September 13.  The woman mentioned in connection to the arrest is believed to be his on-again off-again romantic interest Gloria Govan, who stars in VH-1’s reality TV show Basketball Wives.

The heavily tattooed new Laker has come out with guns blazing via Twitter and text messaging to defend himself, going as far to claim that he was the victim in the incident.  Here is what he tweeted following the arrest:

And he sent the following text message to News10 ABC reporter Bryan May:

“U know any domestic violence situation 9 outa 10 times the man gets arrested. That’s the case here I was the victim but still got arrested. No matter what I say people are gonna think what they want…”

In an April 30th interview with Essence Govan had the following to say about her relationship with Barnes:

Matt and I have made our share of mistakes and, like any relationship, we have our ups and downs, but unlike a lot of the women on the show, we’ve fought through them. We’ve become a minority in the basketball world because we are happy. It’s unfortunate that your happiness has to be questioned, but I think it’s something that we’re both ready to defend because we know what the truth is. It encourages me to make sure this family works and to fight for Matt and our relationship.