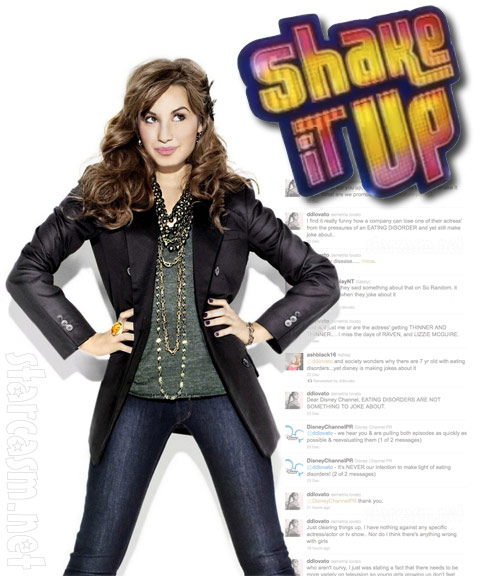 Last night actress and singer Demi Lovato unleashed a series of angry tweets aimed at The Disney Channel after she saw an episode of their show Shake It Up that featured an eating disorder joke. In the scene a rather annoying model character made the comment, “I could just eat you up. Well, if I ate.”

In her tweets Lovato references her own history with an eating disorder and with the network. In case you missed it, the 19-year-old made headlines in October, 2010 when she left her tour with the Jonas Brothers (as well as her role on the Disney Channel’s Sonny With A Chance television series) after an alleged attack on back up dancer Alex Welch. Demi later revealed in an interview with ABC that she had left the tour and the show after her family staged an intervention for her to address her issues with bulimia and self-cutting.

Obviously the subject is a sensitive one for Demi. And, it’s apparently one for Disney too, because the network responded to Lovato’s tweets by announcing they will be removing the joke from the show!

Here is the complete Twitter interaction between Demi Lovato and Disney Channel PR:

And here’s a video clip that includes the joke in question. (Skip ahead to the 4:00 mark if you don’t want to watch more Shake It Up than absolutely necessary.)